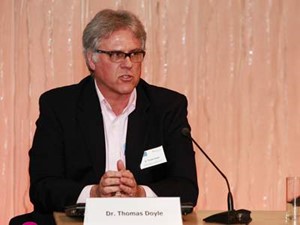 What is ethical about nuclear weapons?

Thomas Doyle is an Associate Professor of Political Science at Texas State University. His most recent book is titled Nuclear Ethics in the Twenty-First Century: Survival, Order, and Justice (Rowman & Littlefield, 2020). He has published articles in journals such as Ethics and International Affairs, Global Governance, Ethics and Global Politics, International Theory, the Journal of International Political Theory, and the Nonproliferation Review.

Nuclear Weapons and the Moral Debate

When I tell people I study nuclear ethics, I sometimes get puzzled looks, as if the term nuclear ethics is a contradiction or fool’s errand. But moral motivations play a significant role in states’ decisions to acquire nuclear weapons or work for their elimination.  The study of nuclear ethics is about understanding and evaluating the role of morality in nuclear decisions.

The morality of nuclear disarmament advocates is based on universal human rights. They contend that, if used, nuclear weapons will wrongfully destroy millions of innocent lives in a matter of seconds or minutes. Many or most injured survivors will lack access to hospitals, doctors, and medicines, which have also been destroyed.  Environmentally, they will face a nuclear winter the kind of which our best dystopian novels and films depict.

By contrast, nuclear possessors invoke a nationalistic morality. For instance, the United States has always framed American identity and its foreign policy missions in moral terminology. We say we are a force for good in the world, and that our communist, Islamist, and authoritarian adversaries are evil. our national survival is not merely a strategic value; it is a moral value.  And other nuclear possessors tell themselves similar stories.

Nuclear ethics understands that moral motivations inform both disarmament advocates and leaders of nuclear possessing states, and it also seeks to impartially evaluate their competing arguments. The stakes of the debate are momentous. Which rights or values are too important to override? Is it national survival or security? Or is it the survival and well-being of humanity and the planet’s environment on which we depend?  When is it justified to engage in mass destruction? And if it’s never justified, then is it ever justified to threaten others with mass destruction?  Nuclear ethics considers all viewpoints on these and other questions.