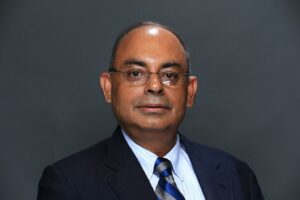 On University of Dayton Week: Fingerprints have been used for identification for quite a while, but do they need an update?

Partha Banerjee is a professor of electro-optics and director of the Holography and Metamaterials Laboratory at the University of Dayton. A member of the International Order of Holoknights and a fellow of the Optical Society (OSA), the International Society of Optics and Photonics (SPIE) and the Institute of Physics (FInstP), Banerjee’s research interests include digital and dynamic holography, metamaterials, optical trapping and acousto-optics. He has published six textbooks, more than 140 journal papers and more than150 conference papers, and he has advised 30 doctoral and 15 master’s degree students. He is working with Penn State University and the U.S. Department of Homeland Security to create a better fingerprint to help identify crime suspects, thanks to a two-year $300,000 grant from the department’s Criminal Investigations and Network Analysis Center.

A New Dimension for Fingerprint Technology

The science of fingerprints has been virtually unchanged since its debut for law enforcement purposes more than a century ago in Calcutta, India. Fingerprints actually are 3D, but typically recorded in 2D photographs. Yes, 2D fingerprints carry a lot of information about a person, but there’s a lot missing. A 2D fingerprint may not deliver the most comprehensive picture.

When you press your fingers on a surface, the 3D object left behind is a ridge-and-valley structure, with ridges of oil or fat about a tenth of a millimeter tall. 2D fingerprints neglect the depth of the finger print, including pores and scars buried in the ridges of fingers that are difficult to see.

Our research takes 3D fingerprints and deposits them on glass, wood and plastic. We will age these fingerprints in different environmental conditions, and then coat the fingerprints with a special film that mimics the surface of the finger.

In our lab, we will break up laser light using beam splitters, and shoot one of the beams through or off films of the fingerprints. Interference between laser lights when transmitted through or reflected off fingerprints create holograms, which will be recorded on a camera. We will then digitally reconstruct the hologram into 3D images to store on a computer. This is the process to provide a true 3D map of fingerprints, including details like pores.

3D fingerprints are not yet admissible in court, but the hope is 3D fingerprints someday will open a new dimension in identifying criminals, or providing a new level of biometric security to verify a person’s identity at the airport, doctor’s office or entering a building.