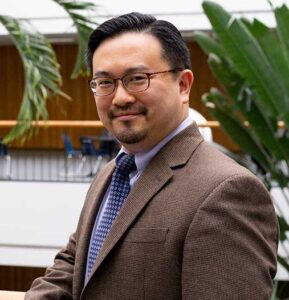 Se-Hyuong Yi, assistant professor of political science, looks into one such method.

Dr. Se-Hyoung Yi is Assistant Professor and Director of Political Science at the University of Houston-Clear Lake. He has a Ph.D. in political Science from the University of Wisconsin-Madison and MAs in political science from the University of Wisconsin-Madison and Korea University. He had previously held the roles of Assistant Professor of Political Science at Trinity Christian College and Research Associate at the Charles F. Kettering Foundation. He has published in the areas of ancient political philosophy, comparative political thought, deliberative democracy, and race and ethnic politics. In 2019, Se-Hyoung Yi received the Taylor L. Willingham Legacy Fund Award from the National Issues Forums Institute for his efforts in creating a space on campus for the development of deliberative dialogue and forums.

In a world full of divisive and polarizing issues, the level of public discourse quickly becomes hostile and antagonistic. Each side claims to have a perfect solution. This is why winning a debate and invalidating the opposite side have become frequent practices in our political life.

Democracy is not merely about winning an argument or finding a perfect solution. In natural sciences, problems are definable and solutions are findable. However, most difficult political and social issues around us, such as poverty, immigration, and gun control, have innumerable causes. They are tough to describe, and difficult or impossible to solve. They are “wicked problems,” according to social scientists Horst Rittel and Melvin Webber. Think about the abortion issue. Both pro-life and pro-choice arguments reflect the values we all hold dear. Even if one side wins the argument, it cannot be the final solution.

To tackle “wicked problems,” we need a different kind of political talk. Political theorists have become interested in the concept of deliberative dialogue. In deliberative dialogue, citizens do not try to win an argument. They do not attempt to persuade each other. Instead, they start a conversation about why this particular issue matters to them personally and why they consider it deeply important. They share their own experiences and stories. Then they carefully weigh the costs and consequences of possible solutions or options they have considered before. Finally, citizens identify what they can do together about the issue and what still divides them. The goal of deliberative dialogue is not a perfect solution or consensus. People may remain divided. However, they find a common ground and shared direction on which they start working together despite their differences. This is the first step for citizens to make a sound decision.