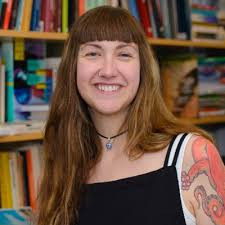 Many of us are missing shared spaces right now.

Robin Zebrowski’s research focuses on embodied cognition and many of its implications, from how humanoid bodies affect the possibility of general artificial intelligence in robotics to the ways that embodiment influences the felt experience of being present in a space. Usually, this means looking closely at places where human bodies intersect with technology (both literally and metaphorically). This work draws on research in the philosophy and psychology of technology, disability studies, cyborg studies, and more. Currently, she’s working with a previous student on the unique ways that living (and potentially robotic) systems in shared spaces produce new autonomous systems of social cognition. She is also applying her work on telepresence and intercorporeality (that ineffable experience of sharing real space with other people) to the current pandemic situation, offering ways of making sense of the technologically-mediated platforms many of us now regularly engage with (and why and how they fail to capture that ineffable presence of others).

Theories of social cognition have historically centered on the minds of each individual in a social interaction, making sense of social sense-making through analogy or neural simulation of the other. But new theories of social cognition center the interaction itself, focusing on the new dynamic system that emerges in that interaction and is not reducible down to just the motivations or brains of the individuals. There ends up being something special about being in shared spaces, the absence of which many have been experiencing as rich deprivation during the current global pandemic. It’s why students reject online learning, and why people rarely accept a broadcast concert as equivalent to the real thing: there’s something special about being there, and it involves human bodies and felt experiences of presence.

But what is that ineffable feeling that something is different about being in a physical space with other people? Every science breaks down the world into smaller and smaller pieces, and helps us understand the building blocks of different kind of interactions. But philosophers and cognitive scientists have long argued that embodiment matters in under-explored ways. My research explores how our bodies are not mere containers for our minds, but are rich sources of information, often pre- or sub-conceptual, and therefore not capable of being represented in language or through certain kinds of mediated technologies. Social interactions thus cannot be reduced back down just to what is “in the head” (or even on the face) of each individual participant. This idea of “intercorporeality” comes from phenomenology, and it offers us a hint of why even our synchronous video meetings are not capable of invoking the real presence of others in the same way as being bodily in the same space: the rich social cues of the lived body are stifled or absent in most of those telepresence technologies.