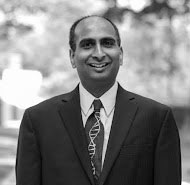 Navin Pokala’s interests are at the intersections of experiment and computation, and science and engineering. As a graduate student at the University of California, Berkeley, he developed and experimentally tested algorithms for designing protein molecules. As a postdoctoral researcher at The Rockefeller University, he developed several computational and experimental tools for better understanding how nervous systems generate behaviors.

Pokala and his colleagues have prototyped a diverse set of genetically-encoded light and chemical-activated tools for manipulating and perturbing the activity of individual C. elegans neurons. To comprehensively measure behaviors as they change over time, they have developed a software suite for tracking dozens of animals simultaneously for a spectrum of locomotion behaviors. They are using these tools to experimentally test algorithms for reverse-engineering the nervous system. The team’s goal is that the experimental methods and computational algorithms developed using C. elegans can be applied to more complex nervous systems, including, ultimately, human patients.

Psychiatric illnesses devastate lives and cost society billions of dollars annually. These illnesses are caused by abnormal nerve connections in the brain that disrupt information processing.

Unfortunately, most of today’s psychiatric drugs result from accidental discoveries made in the mid-20th century. Many are only slightly effective, and have terrible side effects. Understanding how neural networks generate behaviors and emotions could help guide the development of new psychiatric therapies.

A major hurdle to this necessary understanding is the sheer complexity of the human brain, which has 86 billion neurons and trillions of connections. It’s literally the most complex object in the known universe.

By better understanding much simpler brains, we can find useful shortcuts to understand our vastly more complex brains. We study the microscopic roundworm C. elegans, which has only 302 neurons and a completely mapped neural wiring of 6,000 connections.

It’s the closest thing in biology to an electronic circuit board. Engineers design and test electrical circuits using breadboards that allow circuit elements like resistors and transistors to be added, removed, or changed. My team has created genetic tools for manipulating the activity of specific worm neurons, allowing us to make analogous changes in living neural circuits, essentially creating a biological breadboard that lets us test out ideas for neural network function. We have also developed computational algorithms for analyzing and modeling our data.

Through our work, we hope to uncover ideas and principles that can be applied towards the development of more effective therapies for psychiatric illnesses.