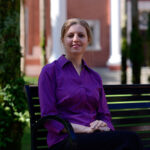 Our most common internet transfer protocols could use an update.

Hala ElAarag, professor of computer science at Stetson University, explains why wireless connections are throwing a wrench into the mix.

Hala ElAarag joined Stetson University in 2002. She is a senior member of ACM and IEEE and a former president of the Consortium of Computing Sciences in Colleges. ElAarag obtained several awards including Stetson University research award in 2005, Best Paper Award at the 11th Communication and Networking Symposium (CNS’08), the Society for Modeling and Simulation International, SCS, Outstanding Service award for outstanding and dedicated technical contributions and services to the Modeling and computer simulation discipline in 2012 and Faculty Mentoring Award from the Mathematics and Computer Science Division of the Council on Undergraduate Research in 2015.

Transmission Control Protocol (or TCP) is the most commonly used transport protocol on the Internet. Since it was conceived in the 70s, it has been tuned to perform well in networks composed of wired links and stationary hosts.  However, it was not designed with wireless links and mobile hosts in mind. When data is lost, TCP assumes that it is due to congestion, the most probable cause for a problem in wired networks. However, on wireless mobile networks, data losses are mostly unrelated to congestion. Nonetheless, these losses trigger congestion control procedures that result in a severe degradation in performance.

In our research, we proposed two protocols to solve this problem. One we call TCP fuzzy, as it uses a fuzzy inference system to classify packet loss as due to congestion or wireless problems. The other, Network Coded TCP or NCTCP, sends data that represent a linear combination of packets. We were able to receive data in an orderless fashion then decode it using an efficient technique.

Our simulations show that both TCPfuzzy and NCTCP dramatically improve the overall performance in wireless networks without hurting the performance on wired networks. We also demonstrate that both proposals are TCP-friendly and maintain the fairness property essential for the health of the Internet.