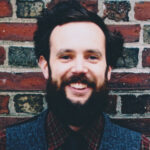 On University at Albany Week: Imagination can help you become more altruistic.

Brendan Gaesser, assistant professor in the department of psychology, explains.

As of fall 2016, I am an assistant professor of psychology at SUNY and Member of Purpose Co-working. Before starting at SUNY Albany, I was a postdoctoral researcher at Boston College in the Morality Lab led by Liane Young and affiliated with the Cognitive and Affective Neuroscience Lab led by Elizabeth Kensinger. I received my B.A. from Massachusetts College of Liberal Arts and my Ph.D. from Harvard University, where I was a graduate student in the Memory Lab led by Dan Schacter.

Pathways from Imagination to Altruism

As humans, we have a deep capacity to help one another, yet we often fall short of fully realizing our capacity for altruism. At a time when news coverage is dominated by callousness and violence, it is worth taking stock about what can make act more altruistically.

One answer our lab has discovered is that our capacity for altruism is partially informed by the ability to harness imagination. Our prior work has revealed that imagining scenes of helping people increases a willingness to help those in need. But the cognitive and brain systems underlying this effect have remained unclear.

A new study, in collaboration with researchers at Boston College, provided insight into two brain pathways that underlie the effect of imagination on altruistic decisions. While people’s brains were scanned using fMRI, activity in the medial temporal lobe (MTL) subsystem, a key network of brain regions that support the mental construction of visuospatial scenes, predicted their willingness to help. This suggests the more vividly people are able to picture a helping scene unfolding in their minds, the more willing they are to help.

We observed evidence of a second brain pathway, whereby willingness to help was also predicted by activity in the right temporoparietal junction (RTPJ), a brain area that enables us to consider the thoughts and feelings of others.  This suggested imagination enhanced perspective taking of the minds of the people embedded within an imagined scene.

We then used non-invasive brain stimulation to isolate the contribution of each brain pathway. We found that the effect of imagination on a willingness to help others may be primarily driven by activity in the MTL, and our ability to imagine visuospatial scenes.

While there is more work to be done, a deeper understanding of the link between imagination and altruism might just help us navigate towards a more moral and compassionate future.