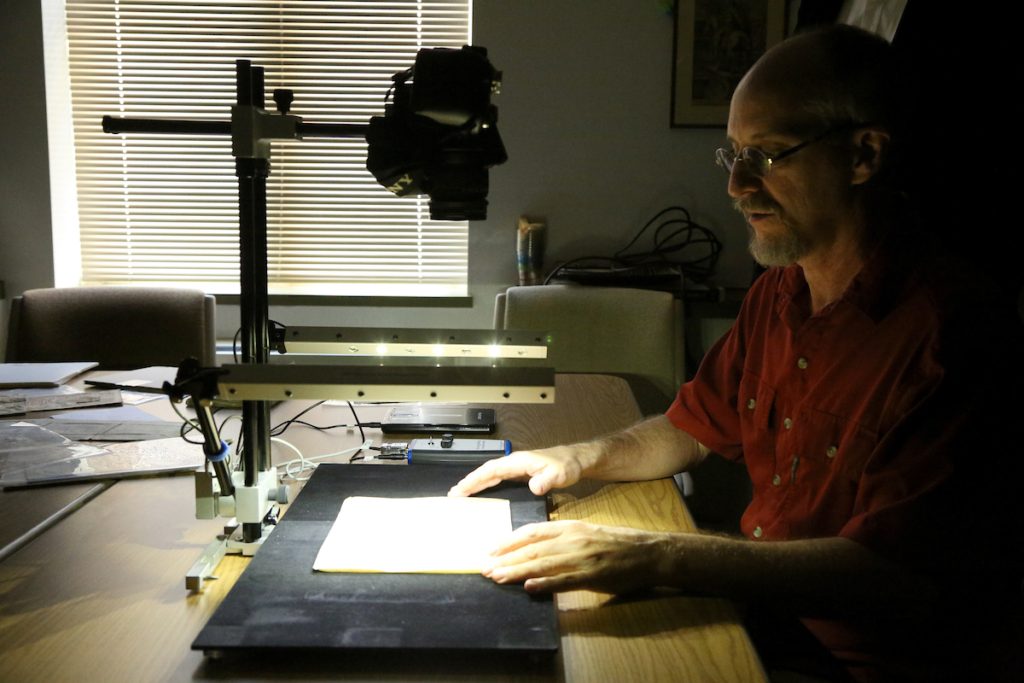 Shawn and Ken with their UV light device for reading faded or erased millennia-old manuscripts, with the document under the lights set to white, or full spectrum rather than just UV.

On Franklin & Marshall Week: Not all technology has been made small enough yet.

Shawn O’Bryhim, professor of classics, explores once such instrument that needs to be smaller.

Professor O’Bryhim holds a B.A. in secondary education and a master’s degree in Latin from Ball State University, and a master’s degree and doctorate in Classics from the University of Texas at Austin. As a Classics professor, O’Bryhim specializes in Mediterranean religion and ancient comedy, both of which figure in his novel, The Messengers: Fire of the Gods. He is author of Beginning Latin: The Complete Course, numerous journal articles on the Classics, and he edited Ancient Comedy: Translations and Interpretations of Four Representative Plays. He has presented numerous papers at US and international conferences.

During the Middle Ages, texts were written on parchment with iron gall ink. Due to mishandling, exposure to light, and reuse, the ink on many of these manuscripts has faded, rendering them all but illegible.

Scholars have been able to resurrect these faded texts by exposing them to ultraviolet light, which causes the ink to appear darker and the parchment brighter.

Unfortunately, the equipment used for this process is bulky, expensive, and difficult to transport to European libraries and museums. The only other option is to send the manuscripts to a lab, but such irreplaceable documents rarely leave their repositories.

In order to alleviate this situation, I worked with Professor Ken Krebs of the Department of Physics to create a device called “The Manuscript Illuminator,” a copy stand fitted with visible and ultraviolet lights. It will also accept infrared lights for imaging papyri. The greatest advantage of the Manuscript Illuminator is its portability: it is light, it works with an AC or DC power source, and it collapses into a container the size of a large briefcase. When completely assembled, it can fit on a table about the size of a TV tray.

The Manuscript Illuminator, which has been awarded a patent, was recently tested at the University Library in Heidelberg, where it uncovered new texts, including doodles drawn by a medieval scribe.