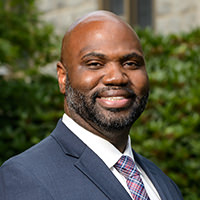 On Connecticut College Week:  Who was Lawrence Reddick?

David Canton, associate professor of history, discusses this marginalized scholar from the recent past.

He was appointed Director of the Africana Studies Program in July 2016.

C-SPAN’s American History TV took viewers inside a Connecticut College classroom on a recent episode of “Lectures in History,” featuring David Canton’s class-session lecture, “African Americans in the 1920s,” on Nov. 9 and 10, 2013. The lecture can be viewed on the C-SPAN website.

Canton’s latest book, Raymond Pace Alexander: A New Negro Lawyer Fights for Civil Rights in Philadelphia, was published in May, 2010, by the University Press of Mississippi. The book has been awarded the 2011 W.E.B. Du Bois Book Prize from the Northeast Black Studies Association.

His research explored the role that Raymond Pace Alexander played in the civil rights struggle in Philadelphia. According to Canton, African Americans experienced de facto segregation in the North; however, segregation in northern cities varied. For example, Philadelphia was a northern city with southern race relations; therefore, during the twenties, some white-owned businesses placed Jim Crow signs on the window. White-owned theaters segregated black customers and white-owned restaurants refused to serve African Americans. Canton contends that his research breaks new ground in civil rights historiography. His research complements the national study of the southern civil rights movement with a local northern study.

Canton’s article “Ethnic, Race, and Coalition Politics in Post-Industrial Urban America” is in the Journal of Urban History and his “The Origins of A New Negro Lawyer, 1898-1923” is in The Western Journal of Black Studies. He has written book reviews for the Journal of Southern History and the Journal of Mississippi History. His article, “The Political, Economic, Social, and Cultural Tensions in Gangsta Rap,” appeared in Reviews in American History, Volume 34, Number 2, June 2006. A recent article appears in Pennsylvania History, Volume 75, Spring 2008.

The Second Generation of Black Historians

Lawrence Dunbar Reddick was the second curator of the Schomburg Collection of Negro Literature, now the Schomburg Center for the Research in Black Culture. He was also a university librarian, a college professor, and a scholar/activist. His contemporaries included preeminent black scholars such as E. Franklin Frazier, Horace Mann Bond, Benjamin Quarles, Charles S. Johnson and St. Claire Drake.

Between 1930 and 1943, 22 African Americans had received their Ph.D. in history. In 1939, Reddick received his Ph.D. in history from the University of Chicago and was part of what I refer to as the second generation of black professional historians. The first generation of black professional historians were W.E. B. DuBois, Carter G. Woodson and Charles Wesley.

Jim Crow forced these scholars to teach at black colleges and universities and only a few were recognized by white scholars, published in white journals and had an opportunity to teach at white universities. However, rather than view Reddick as a marginalized black scholar in white academia, my research locates Reddick as a central figure in the world of black scholarship and activism.

Reddick played a major role in the dissemination, preservation, and development of black history in the academy, the black community, and “white” American public. And, he had an undying faith in the power of black history as a mechanism to cultivate race pride, dismantle racism, and improve race relations.