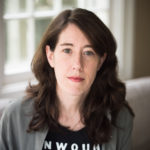 Vera Tobin, assistant professor of cognitive science at Case Western Reserve University, examines how being fooled by a story can lead to great joy.

I’m an associate professor of Cognitive Science at Case Western Reserve University, where I investigate connections between cognition, language, and narrative, with a special interest in cognitive bias and how people think about other minds. My research looks at how people interpret and construct narratives together, how literature and film capitalize on various aspects of our social cognition, and the intersection of ‘small’ linguistic-pragmatic phenomena with sense making at the level of narrative and interaction.

I work on irony, presupposition, and other kinds of tricky viewpoint phenomena in language. My work is also about what sorts of stories and constructions capture our imaginations and insinuate themselves into what we believe — the sorts of things that are good news for mystery writers but perhaps bad news for society.

My book Elements of Surprise: Our Mental Limits and the Satisfactions of Plot was published by Harvard University Press in the spring of 2018. My current projects include Being Difficult, about the place of uncooperative behavior in various kinds of cooperative activities.

Why are plot twists are so pleasurable?

Why does a twist in fiction—feeling you were wrong—feel so good? Cognitive science can help  tell us why.

Masters of fiction have exploited predictable tendencies in the way we think, since long before there was scientific evidence for them.

Stories are cognitively pleasing because they walk us through a naturally satisfying experience of discovery. Along the way, we make ourselves susceptible to being surprised.

Research has illuminated a particular phenomenon of cognitive bias called “the curse of knowledge”—essentially, the trouble with knowing something, or when you think you know something.

It’s very hard to fully suppress this knowledge when you’re thinking about what other people know and don’t know. Children are terrible at this. But it turns out that adults are not that great at it either. Think of playing a game like Pictionary, where your clue can seem incredibly transparent — if you’re the one who drew it.

The curse of knowledge is really everywhere, and stories take full advantage. Giving people little anchoring bits of information leads them to overextend their inferences, which sends them jumping off to premature conclusions.

People are also bad at keeping track of where they encountered information—even to the point of misremembering things they were told, or read, as if these experiences had happened to them. Authors of fiction exploit these tendencies by planting misleading information, burying key details in paragraphs, and obscuring the truth with other tricks of the trade.

These storytelling methods ultimately make discoveries greater and all the more satisfying for readers.