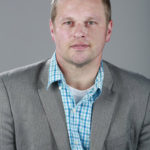 On Butler University Week: How diverse is your Facebook feed?

Lee Farquhar, associate professor of entertainment media and journalism, explains why increasing this value could do some good.

Dr. Lee Farquhar is an associate professor of Journalism and Sports Media. Prior to arriving at Butler, he worked for eight years at Samford University, teaching broadcast news and sports media courses. His professional experience is primarily in radio and television broadcasting. He has also worked as a freelance videographer, shooting video for Kansas State University and MTV. His research combines social media and social psychological theories. He current research focuses on social media use, parenting styles, and parent-child value congruence.

This study is about the makeup of our social networks… and how that makeup predicts tolerance for others. That is, we wanted to see if there were some network characteristics that might lead users to be more tolerant of others. To do this, we examined a number of elements regarding Facebook users, their Facebook behaviors and their network of Facebook friends. We looked at measures of Facebook Intensity, network diversity, changes to the composition of their social network of friends over the past 5 years, the number of unique groups represented within their networks, and so on. For all of these variables, we were looking for an impact on tolerance, which we examined through the measure of desired social distance. Desired social distance is the degree to which we are comfortable with a person socially. In the study, we examined desired distance from someone who is Atheist, someone who is Muslim, and someone who is Gay. Desired social distance in this study could range from having the Other marrying into the family all the way to excluding the Other from the country. In between those two ends of the scale are things like ‘having the Other as a personal friend, or a neighbor, or a coworker, or a citizen in the country’.

What we found was that an increased number of unique groups decreased the desired social distance from others. That is having a bigger number of unique groups represented in your network predicted greater tolerance. Interestingly, the sheer number of Facebook friends predicted less tolerance. So, it is more than just spending a bunch of time with social media and having a large group of Facebook friends. The types of connections matter.