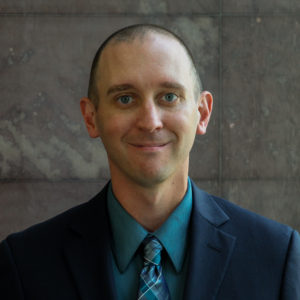 Everyone has a favorite number.

Chris Spicer, associate professor of mathematics at Morningside College, explains why you might need to change your pick.

Chris Spicer is an associate professor of Mathematics and is currently serving as interim Vice President for Academic Affairs at Morningside College. He earned his bachelor’s degree from Mount Mercy College in Cedar Rapids, Iowa, and his Ph.D. from North Dakota State University in Fargo. In his 10 years on the faculty, he has been a three-time recipient of the college’s Sharon Walker Faculty Excellence Award; a two-time recipient of the college’s Dr. William C. Yockey Assessment Award for efforts to improve learning; and a recipient of the college’s Omicron Delta Kappa Faculty Person of the Year Award. He also received the Iowa Section Award for Distinguished College or University Teaching of Mathematics from the Mathematical Association of America.

His mathematical interests lie in the fields of algebra, graph theory, and combinatorics, and is really interested in any math that can be found in popular culture. To that end, he has published papers written with students on topics ranging from the mathematical game of Cops and Robbers to poker, and even the TV show “The Big Bang Theory.”

What is the best number? If you are a fan of the hit TV show the Big Bang Theory, then according to Sheldon Cooper, its 73. Why?

Sheldon gives two reasons: First, 73 is the 21st prime number. Its mirror, 37, is the 12th, and its mirror is 21 again. So we say 73 satisfies a mirror property. Second, if you multiply the digits of 73 together, you get 21, which is its index in the list of primes. So we say 73 also satisfies a product property.

As a mathematician, a natural question to ask is whether or not 73 is the only number that satisfies these two properties. This question was first asked in a math research article coauthored with two undergraduate students in 2015. We found that there are some pretty big prime numbers that satisfy one property, but not the other, but they are rare. For example, the 8,114,118th prime is 143,787,341 and it satisfies the mirror property but the not the product property. The 181,440th prime is 2,475,989 and it satisfies the product property, but not the mirror property.

Last year, using techniques from analytic number theory, we were able to prove that if a prime number were to satisfy the product property, then it must be smaller than 1045 . This showed that there can only be finitely many primes that satisfy both properties. A detailed check of the 1,865,251 possible candidates allowed us to prove that although there are several numbers that satisfy each property individually, there are no other numbers that satisfy both. So 73 is actually the unique number that simultaneously satisfies both properties, and according to Sheldon, is therefore the best.