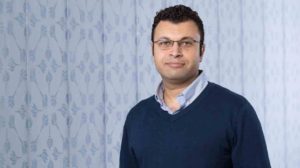 How do organisms that don’t speak communicate with one another?

During his doctoral studies, Shady studied iron acquisition mechanisms in marine bacteria under the supervision of Dr. Carl Carrano. He showed that iron-binding ligands (a.k.a. siderophores) produced by algal-associated bacteria provided algae with bioavailable iron through photochemical reactions in exchange  for organic carbon. After his Ph.D., Shady continued his research on microbial interactions at the University of Washington’s School of Oceanography under the supervision of Dr. Ginger Armbrust. His research identified a widespread mode of signaling between a group of phytoplankton and associated bacteria, whereby some bacteria produced a hormone that stimulated algal cell division, photosynthesis and carbon fixation. In 2015, Shady joined NYU Abu Dhabi as an Assistant Professor in the Chemistry Program and is now an Assistant Professor in Biology with affiliation in Chemistry.

No organism on Earth lives in isolation. This simple fact underscores the importance of interactions between species. But how do organisms interact and what languages do they use to communicate? Spoken language may be familiar to us, but many other species on Earth use chemical signaling, small molecules that carry messages between different individuals.  These individuals could be plants and soil bacteria, a queen bee and its workers or a human and his/her gut microbiome.

For organisms that cannot move around, like corals, chemical signaling may be even more important. Corals have lots of bacteria and other microbes that cover their surfaces and scientists believe these microbes play a major role in coral health — just like our gut microbiome. But how do corals ensure they recruit the right critters from the millions of microbes in surrounding seawater?

To find out, we dived in the Persian Gulf and collected seawater samples at different distances from the surfaces of many corals. When we analyzed these samples, we found out that coral surfaces had a unique composition of bacteria than surrounding seawater. But we were more surprised to find out that all the corals were surrounded by gradients of chemicals that diffuse away from the surface. These molecules included ones that attract certain types of bacteria that could be beneficial to corals. Others were antibacterial molecules that could repel or kill coral pathogens.

Once a coral is sick, its ability to produce these molecules becomes diminished and so its ability to attract the right microbes and repel the bad ones changes considerably. By comparing molecules produced by healthy and diseased corals, we identified several molecules that could serve as early indicators of coral disease. As we continue to study coral chemical signaling, we hope to develop an early warning system to predict coral disease before it occurs and potentially take steps to prevent it.