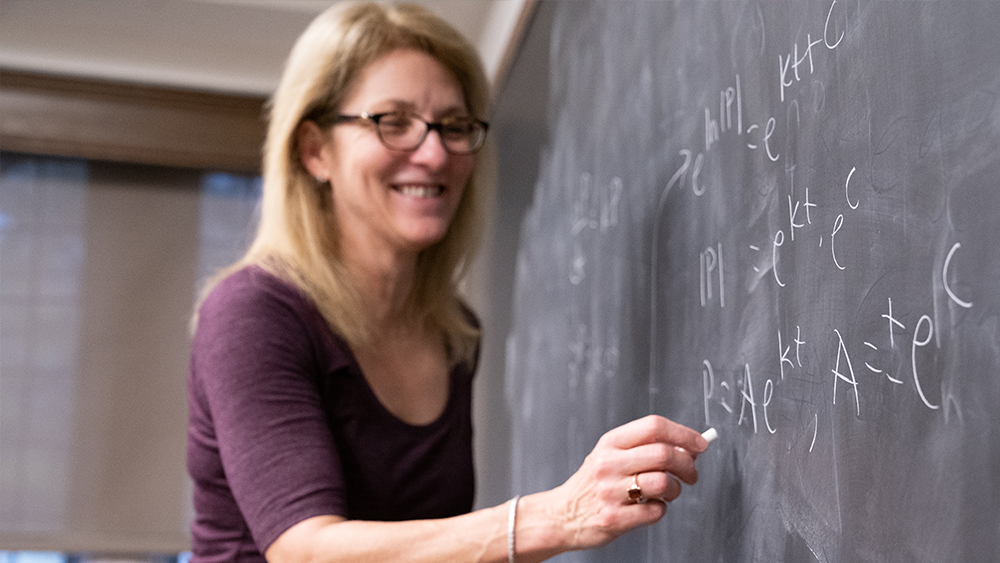 On University of Richmond Week: Mathematics is influenced by political events.

Della Dumbaugh, who has served on the faculty at UR for 25 years, specializes in the history of mathematics and recently led the creation of AmericanMathematics.org, the first website dedicated to American mathematics. She teaches across the mathematics curriculum.

Mathematics is much more than equations or multiplication facts. It’s a living, breathing discipline shaped, in part, by the political forces around it.

The Boxer Rebellion in the early 20th century, for example, forced China to pay war reparations to eight foreign governments, including the US.

President Theodore Roosevelt was persuaded to return some of these funds and create educational opportunities for Chinese students to study in the U.S. and return home to establish strong mathematics programs in China. Later, Chinese trained mathematicians would make contributions to American mathematics.

World War II and the events leading up to it influenced mathematics in an entirely different way.

In April 1933, Hitler introduced laws that excluded Jews and others from employment, including professorships. Many Jewish scholars or scholars with Jewish families began to seek refuge in the U.S.

The mathematician Hermann Weyl, for example, relinquished his position at Göttingen University to accept one of the first faculty positions at the newly founded Institute for Advanced Study in Princeton, New Jersey in1933.

Once there, Weyl worked with colleagues to help other mathematicians find a home in America. This influx of talented European mathematicians catapulted American mathematics to a new level of international acclaim.

The launch of Sputnik, the Soviet Union’s first satellite, in October 1957 prompted the US to link mathematics and scientific prowess with national security. In particular, the infamous New Math was developed to teach K-12 students the “why” of mathematics along with the “how.”

The introduction of the new math occurred so swiftly that educators could not keep up with the materials and students had an uneven response to the approach.  Nationalism and political agendas were not enough to make the program successful.

Taken together, these three historical events show how political conflict can help or harm the advancement of mathematics.

This essay was excerpted by the author from a piece originally written for The Conversation.