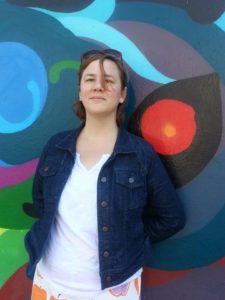 Foster care can be tough. Especially for transgender and gender expansive youth.

Sarah Mountz, assistant professor in school of social welfare at the University at Albany, details some of the extra challenges they face.

Sarah Mountz’ research focuses on the experiences of LGBTQ youth in child welfare and juvenile justice systems, and among homeless youth populations. Her most recent research project, From Our Perspectives, used a community based participatory research (CBPR) framework to look at the experiences of LGBTQ former foster youth in Los Angeles County through qualitative interviewing and photovoice methods. Participants’ photos were featured in a traveling art installation that participants helped curate, as well as on an interactive website, and in a mini-documentary series.

Mountz’ previous research used life history interviewing to explore the experiences of queer, transgender and gender expansive young people in girls’ juvenile justice facilities in New York State with attention to how the intersection of gender identity and sexual orientation, age, race and ethnicity informed their trajectories into and out of the juvenile justice system. She is particularly interested in LGBTQ and other youth activism and organizing.

Challenges of Transgender and Gender Expansive Youth in Foster Care

There is a scarcity of research addressing the experiences of transgender and non-binary youth in foster care, despite the fact that these youth face egregious mistreatment within the child welfare system.

In 2015, a research team of MSW students and faculty members, including myself and Moshoula Capous-Desyllas from the Sociology department at California State University, Northridge, initiated a community-based participatory research study on the experiences of LGBTQ former foster youth in Los Angeles County.

We used qualitative interviews and photovoice methodology to convey this community’s experiences before, during, and after foster care.

Findings revealed that transgender and non-binary research participants had nearly twice as many placements as cisgender participants.

The narratives described a lack of worker and caregiver competency in supporting trans and non-binary youth, systemic barriers to accessing gender-affirming medical care, and barriers to housing, education, and employment that foreclosed opportunities after leaving foster care.

Despite these obstacles, participants’ experiences demonstrated strength and resilience in the face of adversity stemming from  spirituality, trans affirming groups and organizations, and pride in one’s identities.

In addition to identifying as transgender or non-binary, all of the participants also identified as youth of color, and findings should be understood against a backdrop of intersecting identities and interlocking systems of power, privilege, and oppression.

Based on these findings, we recommend that every jurisdiction require competency training for working with transgender and non-binary youth.

That all states have legal protections guaranteeing foster youth’s right to be placed in settings and to use restrooms and other facilities consistent with their gender identity, and to use their asserted name and pronouns.

Finally, that every state cover transition-related medical services and that child welfare agencies contract only with trans-affirming and knowledgeable medical providers.