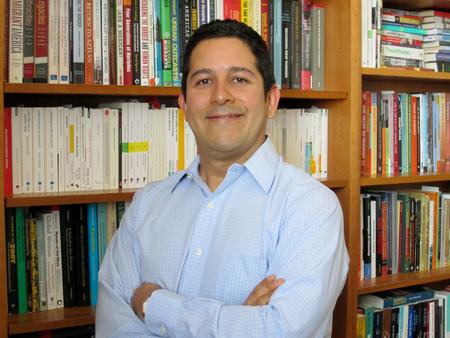 Ernesto Castañeda, assistant professor of sociology at American University, says there are threats on both sides of the boundary.

Ernesto Castañeda is the author of A Place to Call Home: Immigrant Exclusion and Urban Belonging in New York, Paris, and Barcelona (Stanford University Press, 2018); coauthor with Charles Tilly and Lesley Wood of Social Movements 1768–2018 (Forthcoming Routledge, 2018); editor of Immigration and Categorical Inequality: Migration to the City and the Birth of Race and Ethnicity (Routledge 2018); coeditor with Cathy L. Schneider of Collective Violence, Contentious Politics, and Social Change: A Charles Tilly Reader (Routledge, 2017).

He received a PhD in Sociology from Columbia University and a BA from the University of California, Berkeley. He has been a visiting scholar at the Sorbonne, the Institut d’Etudes Politiques de Paris, the Zolberg Institute on Migration and Mobility at the New School for Social Research, and the Centre on Migration, Policy, and Society (COMPAS) at the University of Oxford. He is affiliated with the Center on Health, Risk, and Society and the Center for Latin American and Latino Studies, and fellow at the Metropolitan Policy Center at American University, where he is an Assistant Professor of Sociology.

Migration from Mexico to the United States has decreased in the last decade, nonetheless the ongoing violent drug war in some parts of Mexico, means that some individuals are moving to the U.S. for fear of their lives.

My colleagues and I interviewed 35 individuals who relocated to El Paso, Texas after escaping violence. They were waiting for a decision on their asylum cases or had an irregular immigration status. We wondered how does the fear of deportation influence the daily lives of political immigrants? We evaluated a series of stressors and vulnerabilities that migrants often face and found that these stressors negatively impact their mental health and wellbeing.

They experience constant stress and fear because of the threats they received in home countries and their undocumented status in the U.S. They mistrust not only the people around them, but also social services, teachers, health providers, and non-profits. They refrain from using social, medical, or legal services in fear of being apprehended and sent back to the place they escaped from. They avoid creating strong social connections with people including neighbors, churches, or support groups. They rarely talk about their fear and loneliness with others who could otherwise show empathy and help them.

This context produces isolation, chronic stress, vulnerability to mental illness, and exacerbates symptoms of depression. These experiences are similar to those faced by recent asylum seekers from Central America. Unfortunately, there is little awareness of this untreated trauma and chronic stress and often inadequate mental health services to help those individuals escaping violence and fearing deportation.