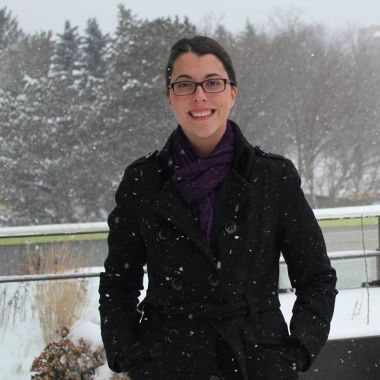 On University at Albany Week:  Nothing lights up the internet like a big storm.

Amber Silver, assistant professor in the college of emergency preparedness, examines how this information can be used for research.

Dr. Amber Silver is an Assistant Professor for the College of Emergency Preparedness, Homeland Security and Cybersecurity. She received her Ph.D. in Geography and Environmental Management from the University of Waterloo in Ontario, Canada. Her primary research interests focus on how individuals and groups make decisions before, during, and after high-impact weather. More specifically, she is interested in the roles that public attention, risk perception, and communication play in protective action decision making during extreme events. Her most recent research has focused on the ways that new technologies, including social media, influence how individuals obtain, interpret, and respond to official and unofficial warning information.

Amber has shared the findings of her research in local, national, and international conferences and symposiums, including The World Weather Open Science Conference, the American Meteorological Society’s annual conference, and the Association of American Geographer’s conference. Her research has also been published in related journals, including Meteorological Applications, International Journal of Disaster Risk Reduction, and Journal of Environmental Psychology.

Additionally, Amber has recently joined the communications task force of the High Impact Weather (HIWx) working group of the World Weather Research Programme of the World Meteorological Organization. This ten year project aims to understand and improve the communication of weather information to different end-users in order to promote appropriate protective actions.

Other key areas of interest include: the impact of environmental disasters on sense of place and place attachment; the use of social media as a risk and crisis communications tool; and the role of new media in collective sense-making during and after disaster.

With the growth of online and mobile technologies, social media has emerged as a potentially powerful tool for sharing emergency information during extreme weather.

I have combined my research on emergency preparedness and severe weather communication by establishing a Crisis Informatics Lab, with my colleague Sam Jackson. We are analyzing how people affected by natural disasters, such as hurricanes, tornados, and wildfires, use social media to search for, share, interpret, and respond to information about these events.

Last fall, we gathered millions of tweets that made mention of Hurricane Florence, before, during and after the storm impacted the Carolinas. We followed a similar process to gather tweets about Hurricane Michael, which caused widespread damage in the southeastern United States about a month later.

We compared how people used social media to make sense of and respond to official and unofficial warning information about both storms. We also looked at if and how this information influenced people’s decisions to take action, whether in the days leading up to the storms or during the storms themselves.

Our preliminary results show that social media activity around Hurricane Florence was significantly higher than Michael. We believe this is due to a theory called social amplification of risk. Florence was the first major hurricane of the season and forecasted weeks in advance, while Michael, a much stronger storm, intensified rapidly just before making landfall.

As we continue to analyze our results, the ultimate goal with this lab is to improve the communication of weather information to citizens. We hope through this research to make practical recommendations that government agencies and emergency management officials can use to effectively communicate with the public when future disasters are in the forecast.