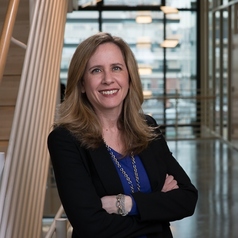 Michele Gilman, professor of law at the University Of Baltimore School Of Law, examines the reasons why.

Michele Gilman is the Venable Professor of Law at the University of Baltimore School of Law. Professor Gilman directs the Civil Advocacy Clinic, where she supervises students representing low-income individuals and community groups in a wide range of litigation, legislation, and law reform matters. She also teaches evidence, federal administrative law, and poverty law. Professor Gilman writes extensively about social welfare issues, and her articles have appeared in journals including the California Law Review, the Vanderbilt Law Review, and the Brooklyn Law Review. In addition, she is a co-director of the Center on Applied Feminism, which works to apply the insights of feminist legal theory to legal practice and policy. Professor Gilman is the immediate past President of the Board of the Public Justice Center, a member of the Committee on Litigation and Legal Priorities of the ACLU of Maryland, a member of the Judicial Selection committee of the Women’s Law Center, and received the 2010 University of Maryland Board of Regents Award for Public Service. She received her B.A. from Duke University, and her J.D. from the University of Michigan Law School.

Women who work full time and year round earn about 80 cents to every dollar earned by men. The gap is even starker for women of color. What causes the gap and why hasn’t it budged for the last 15 years?

To begin with, men and women are steered into different occupations, and male dominated fields pay more for comparable work.

Further, economists have found that gender-based discrimination feeds as much as one-third of the gap.

Unfortunately, existing federal, fair pay laws have not closed the gap. This is partly because courts accept almost any business-related defense raised by employers. So, for example, an employer can justify lower pay for a woman based on her prior salary.

Ten years ago, President Obama signed the Lilly Ledbetter Fair Pay Act into law, giving women more time to file unequal pay lawsuits. This is important because salary discussions are typically taboo in the American workplace…making it hard for a woman to know she is being paid less.

But this Act alone cannot close the gap. Accordingly, fair pay advocates support passage of the proposed Paycheck Fairness Act, which would encourage greater pay transparency, ban employers from asking about salary history, and make it easier to prove discrimination.

Unwilling to wait, many states are passing their own, stronger fair pay laws. And, some private employers are auditing and remedying their gender pay disparities.

These steps may start to close the gender pay gap.