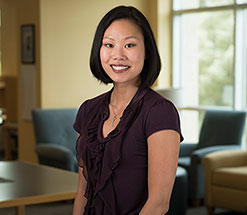 For the Best Political Science Segment Award, Jennifer LeMesurier, professor of writing and rhetoric at Colgate University, examined using knitting as a form of protest.

Jennifer Lin LeMesurier, an Assistant Professor of Writing and Rhetoric at Colgate University, received her PhD in English with a specialization in Language and Rhetoric from the University of Washington. Her areas of expertise include rhetorical theory, composition pedagogy, and performance studies. Her main research focuses on how embodiment and movement practices influence the creation and reception of rhetoric, and she is currently exploring how this intersects with innovations in translingual practices. Her work can be found in such publications as College Composition and Communication, POROI, Rhetoric Review, and Rhetoric Society Quarterly.

While efforts to sway opinion and behavior are often found in the written word, my research also delves into the embodied and the material. Everyday actions, like knitting, can be sources of rhetorical influence.

Such a claim might seem frivolous, but throughout rhetorical history, there is a clear connection between textile work and protest. Throughout ancient Greek writings such as The Odyssey, there are repeated instances of women weaving messages into fabric when they were not allowed to speak, often using these objects to testify to their experiences of sexual or gender-based violence.

Recently, in March of 2017, the Victoria & Albert Museum in London added what some may consider to be a rather unusual object to its collection: a hand-knitted pink hat. This hat is best known as part of the Pussyhat Project, a grassroots initiative to knit and distribute thousands of pink knitted hats at the Women’s March on Washington in 2017 as a response to the growing national awareness of sexual assault. Project founders Krista Suh and Jayna Zweiman launched the hat effort as a sign of solidarity with those who have been victimized, as well as to provide a way for individuals of varying abilities and means to participate in the march.

This project is a powerful demonstration of the rhetorical impact of an everyday activity like knitting, with those in positions of less power creating cunning alternative rhetorical messages. And in knitting those pink caps, these men and women have joined a long-standing tradition dating back to ancient times.

In this case of the Pussyhat Project, knitters are responding to the serious issue of silenced women by using a stereotypically female craft to create a bold, yet warm, political statement.