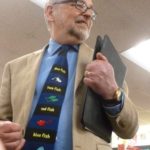 Can the humanities and the STEM disciplines overlap?

Mark West, professor of English and chair of the department of English at the University of North Carolina Charlotte, describes a few examples where applying the techniques of both disciplines was beneficial.

Mark I. West is a Professor of English and Chair of the Department of English at the University of North Carolina at Charlotte, where he has taught since 1984.  In addition to performing administrative duties, he regularly teaches courses on children’s and young adult literature.  He has written or edited fifteen books, the most recent of which is Walt Disney, from Reader to Storyteller, which he co-edited with Kathy Merlock Jackson.  His articles have appeared in various national publications, such as the New York Times Book Review, Publishers Weekly, Americana, and British Heritage, as well as many academic journals.  Before entering academia, he worked as an early childhood educator and professional puppeteer.

The Humanities and the STEM Disciplines as Overlapping Circles

Many faculty members in the English department are deeply involved in science and technology in their scholarship, but their research projects also incorporate the insights associated with the humanities.  For example, a literature professor is engaged in a scholarly project on a Romantic era autobiography titled The History of Mary Prince, which is the first autobiography of a black woman published in England.  My colleague is interested in the fact that Prince spent ten years working in the salt ponds on Turks Island.  In his research, he explores the geological importance, chemical qualities, and physiological effects of salt, and he applies this scientific research to Prince’s life and writings.  By combining the science of salt with the literary and historical analysis of Prince’s text, he is producing scholarship that far richer than would have been the case if he had not incorporated science into his research.

Another example involves the research of one of the department’s linguists.  An expert on language acquisition, this colleague draws on the science of brain development in toddlers in order to better understand their responses to nursery rhymes and picture books.

As these examples demonstrate, the humanities and the STEM disciplines have a complementary relationship.  So long as humanities departments do not isolate themselves in academic silos, they can still prosper in contemporary academia.