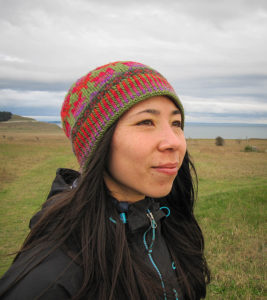 On Carleton College Week: How does life survive in the deepest parts of the ocean?

Rika Anderson ’06 is an environmental microbiologist interested in how microbes and their viruses evolve, adapt, and diversify. She is currently using bioinformatics approaches to investigate how marine microorganisms evolve in response to the extreme environment of deep-sea hydrotherapy vents. She is particularly interested in understanding what this can teach us about the origin and early evolution of life on our planet. She teaches Genomics and Bioinformatics and part of Introductory Biology.

Deep below the ocean’s surface superheated water erupts from the seafloor, creating towering chimneys that are home to heat-loving microbes that eat and breathe chemicals like iron and hydrogen.

My collaborators sent a team of researchers to study hydrothermal vents in the Caribbean Sea using a robotic submersible. We wanted to peer directly into their genomes, which could tell us the story of their microbial family history. But first, we had to use new techniques to carefully put together individual microbial genomes from millions of short pieces of DNA taken directly from the complex microbial community in our sample. It’s sort of like piecing together a giant jigsaw puzzle.

Like a jigsaw puzzle, the assembled pieces tell a story. This particular story tells us how the microbes evolve in different types of hydrothermal vents. Some hydrothermal vents are hot and acidic, whereas others are cooler and more alkaline. We found that the geochemical imprint of those hydrothermal vents could be found in the microbes’ genomes. Their genomes showed that some microbes were thriving while others were simply surviving in certain types of vents. We could pinpoint which genes may have provided an evolutionary advantage. Those genes suggested that avoiding viruses could be an important element to survival in the deep sea.

As we continue to develop new techniques to study microbial genomes and sample the deep sea, we hope to pull back the curtain on how microbes survive in the deep, dark places of the world—and how our own microbial ancestors may have done the same on the early Earth.