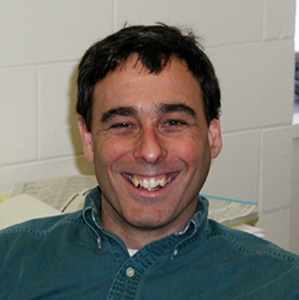 A new treatment for ALS could be on the way.

Joe Erlichman, professor and chair of science at St. Lawrence University, explores why looking small could help get the treatment where it needs to go.

The brain is composed of two types of cells termed neurons and glia. Most of what we know about the processing of information in the brain involves the generation, propagation and transfer of electrical signals between neurons within the brain. Although it is clear that neurons play a pivotal role in all brain-related activities such as learning and memory, recent research suggests that glial cells may play a crucial role in normal neuronal function. The importance of glia in normal brain function may be related to their ability to regulate a variety of chemicals accessible to the neurons. The regulation of these chemicals is important to study because these substances that can have profound effects on the production of electrical signals in neurons and thus the manner in which information is processed by the brain.

My National Science Foundation grant is focused on examining the role of glia in a region of the brain involved in the regulation of breathing. Using live brain tissue and fluorescence microscopy, I am investigating how glia regulate the level of acidity in a region of the brain known as the medulla. Controlling the level of acidity in the body is one of the most tightly regulated systems known. This tight regulation is thought to occur because slight variations in acidity (either too much or too little) can greatly disrupt cell function throughout the body. The medulla is a particularly important region of the brain since neurons at these sites ‘sense’ changes in acidity by altering their production of electrical signals. These changes in electrical signals ultimately result in a change in breathing, which is one method the body uses to regulate acidity. Investigating the role of glia in this response is exciting because it will provide important new information on the intimate coupling of glial and neuronal function and how the interaction of these cell types help shape information processing in the brain.

Nanotechnology is a powerful suite of technologies that historically have been confined to industrial processes but are now making their way into biomedical applications. They have characteristics that differentiate them from other molecules. By definition they are smaller than 100 nanometers. A sheet of paper and a human hair are about 100,000 nanometers.

We are working with the cerium dioxide nanoparticle, which, at 2 nanometers, is about the size of a single sugar molecule. They are chemically unique and extremely potent antioxidants that rapidly neutralize naturally occurring oxidants that accumulate following injury or disease. Oxidants strip electrons from cells, damaging them and impairing their function.

Cerium dioxide nanoparticles eliminate this damage and regenerate cells as long as they are present in tissue. Generally, they have a long half-life in tissue so repeat administration is reduced.

The cerium dioxide nanoparticles we have been working with are small enough to penetrate all tissues, including the brain. The brain normally restricts the movement of all but a few compounds needed to sustain brain function, but fortunately, our particles have little effect on normal, healthy cells, impacting instead only cells producing lots of oxidants.

Using mouse models and stem cells from humans, we have found that cerium dioxide nanoparticles decrease tissue damage and improve function in subjects with stroke, multiple sclerosis and Lou Gehrig’s disease. Others have reported similar findings in models of Alzheimers, Parkinson’s disease and some cancers.

We are at the cusp of developing biomedical applications, but our hope is that we can help find treatments for neurodegenerative diseases, stroke, traumatic brain injury, radiation damage, chronic wound healing, antimicrobials and cancer, among the most prevalent and devastating disease known to mankind.