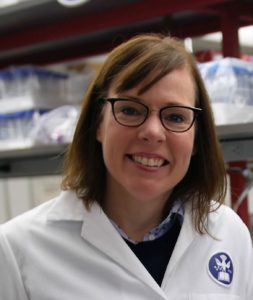 Jamie Maguire is an assistant professor of neuroscience at Tufts University School of Medicine and a member of the Neuroscience and the MS in Pharmacology and Drug Development Program faculties at Tufts’ Sackler School of Graduate Biomedical Sciences. The Maguire laboratory is investigating how stress triggers neurological and neuropsychiatric disorders, ranging from epilepsy to depression, how the stress response is regulated and how dysregulation may contribute to these disorders.  Research focuses on the role of receptors of the neurotransmitter gamma-aminobutyric acid (GABA), which mediate the majority of inhibitory synaptic transmission in the brain, in the regulation of stress-relevant circuits. Maguire received her Ph.D. in neuroscience from George Washington University and her postdoctoral training at the University of California, Los Angeles.  Her discoveries have helped pave the way for development of the first drug specifically addressing postpartum depression for which FDA approval is expected to be sought.

Postpartum depression affects nearly 20% of new mothers and approximately a third of them do not respond to current treatments, likely because they do not target the underlying neurobiology of this disorder. Despite this high incidence and unmet treatment need, very little basic science research has focused on postpartum depression, although stress is a suspected risk factor.

The peripartum ovarian hormone changes that precede and immediately follow birth were initially thought to contribute to the increased vulnerability to mood disorders. However, patients with postpartum depression do not show significant changes in hormone levels. Interestingly, hormone withdrawal only increases depression symptoms in patients with a history of postpartum depression, suggesting that these patients are particularly sensitive to changes in ovarian hormone levels or their derivatives, neurosteroids.

A site of action for neurosteroids, GABA receptors regulate the body’s response to stress and have been implicated in postpartum depression. In fact, mice that lack neurosteroid-sensitive GABA receptors exhibit abnormal postpartum behaviors, including depression-like behaviors and deficits in maternal care. Our investigation into the mechanisms mediating these abnormal postpartum behaviors led to the discovery that these mice are unable to suppress the stress response during the peripartum period, which may contribute to postpartum mood disorders.

To test this hypothesis, we generated another mouse model in which we disrupted GABA’s ability to regulate the stress system. These mice have the inability to suppress the peripartum stress response and exhibit abnormal postpartum behaviors. The only commonality between these models is the inability to suppress the stress response during the peripartum period. These findings implicate dysregulation of stress reactivity in the underlying neurobiology of postpartum depression and offer a potential new path for treatment.