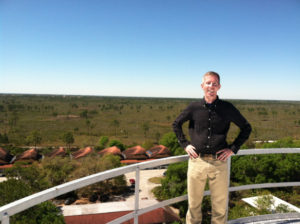 Population changes across the country can lead to extinction of native species.

John Kominoski, assistant professor in the department of biological sciences at Florida International University, describes how building dams in the growing southwestern U.S. can be harmful for fish popluations.

​​I am an Associate Professor in the Department of Biological Sciences at Florida International University (Miami, Florida, USA). I am an ecosystem ecologist and biogeochemist who studies how changes in water chemistry (elevated dissolved nutrients, saltwater intrusion) affect the rates of organic matter processes and the net effects on carbon storage in terrestrial, aquatic, and coastal wetland ecosystems. I am co-PI of the Florida Coastal Everglades Long Term Ecological Research Program for which I lead research projects investigating: 1) wet and dry season dynamics on aquatic ecosystem metabolism as driven by water column depth and flocculent organic matter, 2) subsidy-stress effects of saltwater intrusion on wetland soil ecosystems, and 3) long-term interactive effects of storm-induced phosphorus loading and drought on ecosystem productivity and nutrient dynamics spanning freshwater, brackish, and marine wetlands.

Dams prevent flooding and they provide communities with water and electricity. But, they are proving to be a real problem for some fish.

Healthy fish populations rely on the availability of water and variation in water flow.

But dams, which fragment rivers and streams, stop or restrict both.

In a study funded by the National Science Foundation, my colleagues and I examined more than 850 species of fish in rivers and streams throughout the southern United States.

We found the high number of dams built close to each other throughout the southeast limits where fish can really move throughout their lives.

Some fish species are more at risk than others and this is not a one-size fits all scenario.

But, our findings, nevertheless reveal dams are consistently a contributor in the local extinction of native fish species.

The southern United States is one of the country’s fastest-growing regions.

As agricultural, industrial and urban communities flourish, we can expect more dams to be built and retrofitted in order to meet the demands on freshwater resources.

We hope our findings will allow resource managers to better understand where extinction rates are high, attribute them to specific causes, and set conservation priorities for vulnerable, freshwater fish species.

This will be critical in meeting the long-term water needs of people, plants and animals in areas with dams.