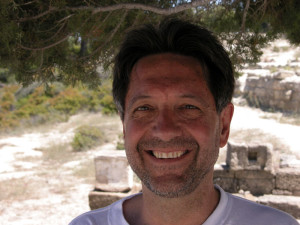 Nikos Solounias, professor of anatomy and basic sciences at the New York Institute of Technology, examines whether horses have more toes than previously thought.

Nikos Solounias, Ph.D., specializes in evolutionary biology, paleontology, anatomy. His research focuses on living and extinct ungulates such as horses, giraffes, and antelopes. Solounias teaches embryology and gross anatomy. He is also a research associate at the American Museum of Natural History and a collaborator for the ongoing research of extinct ungulates at the Peabody Museum of Archeology and Ethnology at Harvard. Nikos received his Ph.D. in geology from the University of Colorado, master’s degree in embryology from Clark University, and a bachelor degree in biology from Cornell.

How Many Toes Do Horses Have?

Millions of years ago, humans and horses had a common ancestor with five toes.

Until now, scientists believed horses gradually evolved with fewer digits. This theory claims the first animal formally known as a horse retained only four digits, its later descendant was reduced to three, and today’s horse retained just the central single digit known as the metacarpal, the long bone above the hoof.

This central bone has two smaller bones that run along its outer sides, tapering mid-way, known as the splints. While scientists have long seen the splints as partially formed remnants of the second and fourth digits, they have missed key evidence – namely, that these fragments contain elevated surfaces.  These ridges appear to be the partially formed missing first and fifth digits. The two winged cartilages of the hoof are also remnants of the first and fifth digit.

Remarkably, we also find hints of the missing digits on ancestors that were believed to have three toes. And what’s more, we have discovered neurovascular evidence in support of this theory.

Fetal dissections of the modern horse reveal a greater number of arteries and nerves than would be expected in a single digit. If today’s horse is indeed monodactyl, meaning one digit per forelimb, we would expect each forelimb to have two veins, two arteries, and two nerve bundles. However, we found between five and seven neurovascular bundles per forelimb, suggesting that more toes begin to develop, but do not fully form. Therefore, the horse is not truly monodactyl as previously expected.