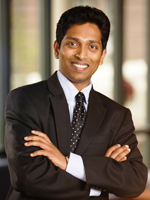 Can we make human organs in the lab?

Prof. Karande joined the Chemical and Biological Engineering Department at Rensselaer in 2008. Before joining Rensselaer, Prof. Karande was a postdoctoral scholar in the Chemical Engineering Department and Center for Cancer Research at Massachusetts Institute of Technology. He obtained his Ph.D. from UC Santa Barbara in 2006 where his thesis work focused on the use of chemical enhancers for transdermal drug delivery. Prof. Karande has received numerous awards for his work including The Edison Award for best Product in Science and Medicine (2009), The Anna Fuller Fellowship in Molecular Oncology (2006-2007), Outstanding Pharmaceutical Paper by the Controlled Release Society (2005) and the Fionna Goodchild Award for Excellence in Undergraduate Mentoring (2004). Prof. Karande is an inventor on several patents in the area of Transdermal Formulation Discovery and Novel High Throughput Screening Platforms. He has served as scientific advisor to fqubed Inc., a soft materials innovation company (now part of Nuvo research).

December 23rd, 1954, marks an important event in modern medicine. The first successful kidney transplant was performed at Brigham Hospital in Boston on this day. Since then, over 750,000 transplantations of organs including the lung, liver, heart and pancreas have saved countless lives in the U.S., and many more across the world. Despite these successes, there are still far more patients needing organs than there are available donors.

In 2017 alone, over 115,000 people were on the waiting list with only 28,000 organs available. As a result 20 people die every day in the U.S. while waiting for donors. Being able to make human organs in the laboratory may sound like science fiction, but is exactly the solution we need. In my lab and many others, scientists are already working on making this a reality using two major technical advances.

The first is “cell reprogramming.” It is now possible to take just a few cells from the skin of a person and reprogram them into stem cells. Stem cells are master cells that can be guided to become any type of cell in our body. These can then be grown into large quantities in small factories called bioreactors for making different types of organs.

The second is “3-D bioprinting.” Developed in the ’80s, this technology is being used to print tissues and organs by precisely arranging cells and molecules at dimensions that are 10 to 100 times smaller than the width of a single human hair. This means we can mimic the extremely intricate structural complexities of human organs that are important for reproducing their function when transplanted into the body.

In summary, the dream of making organs in the lab for use in patients is well within our reach. The future holds tremendous promise, indeed.