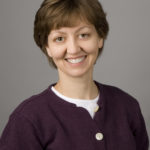 Can chemistry help us better understand the past?

Cindy Strong earned her Ph.D. in chemistry from the California Institute of Technology (Caltech) and has been at Cornell College since 1989, where she teaches courses in analytical and inorganic chemistry. Strong has received grants from the National Science Foundation, the Petroleum Research Fund, and other agencies to fund instrumentation and research projects with undergraduate students.

Broken pottery pieces might not look like much to the average person, but for archaeologists, they can be the keys to understanding the past. In my chemistry research lab, we’re working with the Office of the State Archaeologist at the University of Iowa to study the chemical composition of prehistoric pottery fragments.

The fragments we’re studying are from the Mill Creek culture in northwest Iowa and date back to 800 to 900 years ago. Archaeological research has revealed many aspects of Mill Creek village life, but questions remain regarding the extent of trade between Mill Creek people and other cultures.

We studied pottery fragments from seven villages of the Mill Creek culture. We found that the chemical makeup of most of the fragments is very similar, indicating that they were likely made from a similar clay source.

Now, we’re applying this same x-ray fluorescence technique to study the pottery fragments from an archaeological site in western South Dakota. This research technique is all about using chemistry to help archaeologists better understand the culture these pottery fragments came from. It’s fascinating to think that we can make chemical measurements today that can help us to understand a culture that existed almost 1,000 years ago.