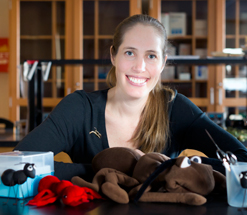 Krista Ingram, associate professor of biology at Colgate University, examines how when you go to sleep or wake up can affect your decision making process throughout the day.

The Decision Making of Early Birds and Night Owls

When asked about their sleep patterns, many people will either classify themselves as an early bird or a night owl. But, did you know that your biological predisposition to either could have an influence on your decision making throughout the day?

A recent study I conducted explored how oscillations in our circadian clock genes (which influence our sleep-wake cycles) could impact how we make decisions.

The study included 139 participants, who were split into groups or chronotypes based on a survey that helps gauge preference for morning or evening hours. Participants were then given a risk-taking test and an ethics test.

The risk assessment is known as the Balloon Analog Risk Task. In each round, participants could earn money for pumping up a virtual balloon, but they would lose all of the money from the round if the balloon bursts before taking payout. The ethics test challenged participants to match and add numbers in a time trial, with payments earned for each successful match.

So what does this all mean? If your clock genes cycle early (morning person), you are more likely to make unethical or risky decisions in the afternoon, while the same can be said about a night owl making unethical decisions in the morning.

Just imagine a judge or investment banker, who are early birds, making their decisions in the late afternoon… It might behove you to see them earlier!