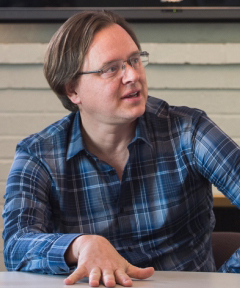 Climate change is no easy sell to many Americans.

Firmin DeBrabander, professor of philosophy at the Maryland Institute College of Art, examines the intricacies of selling something that can’t always be seen.

Firmin DeBrabander studied Philosophy at Boston College and the Catholic University of Louvain in Belgium, and received his Ph.D. in the field from Emory University in 2002. He has taught at MICA since 2005, and served as chair of the Humanistic Studies department from 2009 until 2012. His specialties include the History of Western Philosophy, Ethics, Political Theory, and Environmental Ethics. He also teaches courses on Media Ethics, Economic Theory, Eastern Philosophy, Philosophy of Science, and Medical Ethics. In 2007, he published a book entitled Spinoza and the Stoics (Continuum). He has published academic articles in journals such as History of Philosophy Quarterly, International Philosophy Quarterly, and in a volume issued by Cambridge University Press entitled Stoicism: Traditions and Transformations. More recently, he has written social and political editorials for the Baltimore Sun, Counterpunch and Common Dreams. He has organized several symposia in honor of Constitution Day at the college, including such speakers as John Waters, Helen Thomas, Angela Davis, Ralph Nader, Jesse Jackson, Amy Goodman, Andrew Sullivan, and Cornel West.

Why Climate Change is a Hard Sell in the U.S.

Why is climate change such a hard sell in the US? Many argue that Americans are too selfishly protective of their consumer lifestyle- founded on cheap oil- to be persuaded by climate change action.

But I suspect there is more to it: climate change is especially liable to doubt, skepticism and inaction.

For one thing, the climate is a special object of knowledge unlike any other. It is always changing; it is immense, elusive, and in its most accessible form to us—the weather- subjective and variable. As a result, climate change is a form of pollution that is tricky to rally around, because it is impossible to pinpoint or identify neatly and succinctly.

What’s more, dire climate change predictions sound like the stuff of science fiction. It is easy to doubt such apocalyptic pronunciations when the sun is shining outside, flowers are in bloom, and everything looks fine.

Alternately, apocalyptic predictions make any response seem quite futile. In the face of such devastation, which scientists say will be hard to avoid, what really can we expect to achieve? And if we would do anything, we must first negotiate the most complex global cooperation humanity has ever attempted.

I might point out that we have indeed tackled immense environmental and geopolitical threats in the past, like the hole in the ozone layer, and the nuclear standoff with the Soviet Union, which risked destroying the planet.

And climate change might also soon furnish us with direct and persuasive evidence of its existence—and quickly change public opinion in the US. This might come from a string of scorching summers, or weather disasters. The only problem is, then it might surely be too late.