Are you avoiding some important information?

I was trained as a game theorist with a Mathematics Ph.D. from the University of Michigan.  But whereas game theorists usually assume that people making strategic decisions are hyper-rational, I try to acknowledge that real people sometimes make mistakes.  Since coming to Carnegie Mellon, a hotbed for behavioral economics and behavioral decision research, my research interests have expanded in these directions.  I use economics, psychology, and mathematics to develop theories about why people make the choices they make.

Information is more accessible than ever before, and it should be used to help us make better decisions.  Sometimes we use it, say, when we look up restaurant reviews before deciding where to eat.  But, surprisingly, people often deliberately avoid useful information.

Dieters might prefer not to look at the calories in their tasty dessert.  People at high risk for disease often decline free and easy screenings.  And many people steer clear of media outlets that clash with their political ideology. 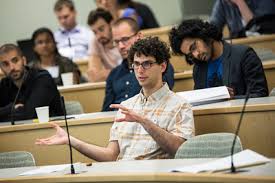 George Loewenstein, David Hagmann, and I recently reviewed the evidence documenting when people avoid information and the leading theories why they do so.

People sometimes avoid information strategically.  For example, a defense attorney might not want to know whether his client is actually guilty so he can put forth the best possible defense without being bound by the truth.

But people also often avoid information just because they expect it will make them feel bad.  Investors are less likely to look up the value of their retirement portfolios on days when the market is down.

Avoiding bad news might seem natural, but the strange thing is that if you expect to get bad news, you already kind of know that the situation is bad.  The prevalence of this behavior suggests either that people are deceiving themselves with wishful thinking or that they dislike dealing with and processing bad news.  Getting bad news can force you to pay attention to something you’d rather ignore.  And if the information is thrust upon you, you might just try to ignore it anyway.

Information avoidance can be harmful, for example, if an HIV positive individual does not get tested and then spreads the virus.  But people generally have a reason for avoiding information.  Their feelings are real, and they’re trying to protect themselves from dealing with something they’d rather ignore.