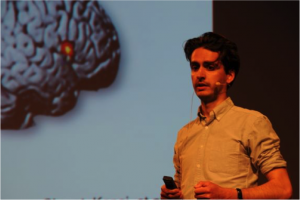 Neil Garrett, postdoctoral researcher in the Daw Lab at the Princeton Neuroscience Institute, looked into our brains to find a clue.

I am a Postdoctoral Researcher in the Daw Lab at Princeton Neuroscience Institute. Before this, I received my Ph.D from the department of Experimental Psychology at University College London (UCL) in the Affective Brain Lab under the supervision of Tali Sharot. This explored how valence – whether a piece of news is good or bad – influences the extent to which information is integrated and used to revise beliefs about ourself, our future and the future of those around us. Recently I have been pursuing a separate strand of research examining the role of emotional adaptation in aversive decision making (find out more about this here). I am excited to continue these areas of research and others at Princeton using a combination of complimentary approaches from computer science, behavioural economics and brain imaging.

You have probably observed in life how dishonesty can be a slippery slope whereby small acts of dishonesty progress to larger and larger ones.

There might be many reasons why such a slippery slope occurs. But we suspected that one of these was a basic biological principle of how our brain works – emotional adaptation.

So imagine dishonesty as an unpleasant picture. The first time you cheat on your taxes, you feel bad about it and this curbs your dishonesty. But the next time you cheat you have adapted, there is less of a negative reaction to hold you back and you lie more as a result.

To test this, we conducted an experiment in which participants gave financial advice to a second person reliant on this advice.

They did this whilst they were lying in a MRI scanner so we could look for changes in brain activity.

In one block of trials, participants were incentivized to make their advice dishonest; giving dishonest advice benefitted them but come at a cost to the person receiving their advice.

Our data revealed that the amount by which participants lied got larger and larger over the course of this block. They started with small lies but these grew and ended with larger lies.

This study provides the first empirical evidence that dishonest behaviour escalates when it is repeated, when all else is held constant. And it ties this phenomenon to emotional adaptation.

It highlights the potential dangers of engaging in small acts of dishonesty on a regular basis, but also suggests a possible avenue to curbing dishonesty – such as finding ways to reproduce a negative emotional reaction that stops us from engaging in such acts.