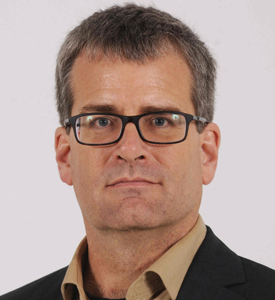 How do we make our homes more efficient?

Robert Brecha, professor in the renewable and clean energy program at the University of Dayton, discusses why low-energy living doesn’t have to be uncomfortable.

Dr. Robert Brecha was born and raised in Ohio and attended Wilmington High School and then Wright State University, graduating  with a B.S. in physics in 1983. He received his Ph.D. in physics from the University of Texas at Austin in 1990. From October 1990 until November 1992 he was a post-doctoral researcher at the Max Planck Institute for Quantum Optics in Munich, Germany. Upon returning to the US, he took a position at the University of Dayton, where he has been since August 1993. He is now a Professor of Physics and teaches in the Renewable and Clean Energy  Graduate Program and coordinates the Sustainability, Energy and the Environment (SEE) Minor and other SEE initiatives.  Since 2006 he has been working periodically as a visiting scientist at the Potsdam Institute for Climate Impact Research in Germany.

Our homes use 20% of the energy in the country and account for about a quarter of all carbon dioxide emissions. Becoming more efficient in how we use energy at home is not only a personal issue, but an active area of research.  And the personal and professional can be nicely mixed.

Your dreaded monthly utility bills actually contain enough information for researchers to get a really good start on sorting through lots of data on homes around the country and figuring which could most use upgrades or behavioral changes. Take the electric and gas utility bills of a home for a couple of years, together with the average temperature of the month, and we can get a lot of information about that house’s insulation, hot water consumption, air conditioning use and more.

How do we get people to act on our research?  Homeowners are notoriously short-sighted and don’t tend to make changes unless they will pay off quickly.  We demand a much higher return on our investments than we would ever receive from the bank.

But our research has found small victories and the realization you’ve saved more than your neighbor tend to work as motivational devices.  Even getting a bit of positive reinforcement on your own energy is enough to spur more action.

But low-energy living does not mean uncomfortable living.

I’ve found this out myself several years ago when we built a strawbale house with solar energy for hot water and electricity.

Unintentionally, a personal choice has become a great teaching tool, a practical application of reducing energy use by 80% compared to average houses.

Now my town now has several of these super energy-efficient houses, which students tour regularly as part of their own research.