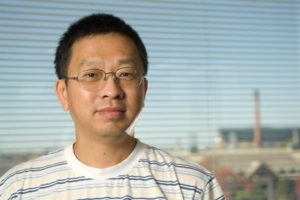 Dr. Yong-Hui Zheng of the Microbiology and Molecular Genetics Department at MSU.

Your body may be all you need to combat HIV.

Yong-Hui Zheng, associate professor of microbiology and molecular genetics at Michigan State University, examines how studying a group of patients known as the Elite Controllers may unlock the secret to HIV resistance.

My laboratory focuses on retrovirus-host interactions using HIV-1, a human retrovirus that causes AIDS. In particular, we are interested to study natural host factors that have the ability to inhibit retrovirus replication. These host proteins are called restriction factors. Understanding the antiviral activity of these restriction factors has permitted the discovery of novel antiretroviral mechanisms, and holds the great promise of new antiretroviral therapies. During the past, we have demonstrated the anti-HIV-1 activity of human APOBEC3DE and APOBEC3H proteins, which belong to the APOBEC3 sub-family of cytidine deaminases. APOBEC3 proteins have very potent antiretroviral activity, but, unfortunately, most of them are neutralized by the viral protein Vif. Thus, a complex competition exists between the host cell and the virus that is driven by evolution.

A major effort in the laboratory is to discover new type of restriction factors. Recently, we reported that MOV10 has very broad and potent antiretroviral activities. MOV10, a putative RNA helicase, can be packaged into virions and inhibits viral replication at a post-entry step, resulting in 20- to 100-fold reduction of HIV-1 infectivity. In addition, we reported a novel HIV-1 restriction phenotype in a human T cell line CEM.NKR. Although these cells express normal levels of CD4 and CXCR4, they are highly resistant to HIV-1 infection. In fact, we found that they express an unknown restriction factor that potently inhibits HIV-1 replication.

Currently, there is no cure for HIV-1; once patients have it, they have it for life. While antiretroviral therapies are certainly available, they can only prolong life, albeit dramatically, but they cannot cure the disease. Current drug treatments have to be taken for a lifetime, which causes side effects and many other issues.

HIV does not cause the devastating disease in a small cohort of patients, who are known as “Elite controllers.” Understanding the secret in this HIV resistance may find a cure for HIV. We studied HIV resistance in human T cells because these cells are primary targets for HIV-1 infection. We identified a human T cell line called CEM.NKR, where HIV replication is decreased by almost 1,000-fold. Understanding the HIV resistant mechanism in these T cells has been the primary interest in our laboratory.

More than 1.2 million people in the US have HIV.  In China, doctors found 104,000 new cases of HIV/AIDS in 2014. The number of infections is rising, even though the country still has a low rate of infection. Although progress seems slow at times, we continue to move our research forward: finding a cure will take many years. We feel that it’s important enough, on a world-wide scale, to dedicate our work to fighting this disease.