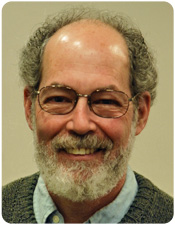 Do dolphins speak in different dialects?

Dr. Rogers has taught biology at various levels since he was in high school in San Francisco, Calif. He has been at Winthrop for more than 20 years and before that taught at the University of California-Berkeley, Sonoma State University, Marin Community College, the California Academy of Sciences, and several other institutions. Originally interested in art as a career, his attention turned to biology at a young age and he has enjoyed exploring that area of inquiry ever since.

Rogers has taught a wide array of courses at Winthrop, from the freshman-level through graduate seminars. The specific undergraduate classes he has taught in the Biology major include “Principles of Biology,” “Honors General Zoology,” “Evolution,” “Animal Behavior,” “Ornithology Vertebrate Natural History,” and the departmental capstone class, “Integration of Biological Principles.” Graduate classes include “Recent Advances in Organismic and Developmental Biology,” “Recent Advances in Evolutionary and Environmental Biology,” and “Advanced Topics in Ecology/Evolutionary Biology.”

In addition to teaching, Rogers has been active in the Department of Biology’s Graduate Program and has been mentor to 25 graduate students of his own and has served on the thesis committees for many others. His students have done research on every group of vertebrates (fish, amphibians, reptiles, birds and mammals) as well as on some invertebrates including spiders and snails. In addition to working with graduate students, he has served as a research advisor to many undergraduates, guiding them in work on bees, fish, lizards, birds and mammals.

He has a long list of publications and invited presentations that extend back to his high school days and has published his own work on fish, birds, marine mammals, monkeys and several other groups. Presently, in addition to his research with graduate students, he works primarily on Amazonian freshwater dolphins, particularly the pink dolphin. His work takes him to northeastern Peru, where, in a quiet primary tributary to the much larger Amazon River, he and his students look at dolphin distribution, ecology and behavior, especially of mothers and their calves.

Rogers has served on several boards both within scientific and other organizations. He was a counselor with the South Carolina Academy of Sciences (1996-1999) and has been an adjunct professor at the University of South Carolina since 2008. Locally, he is on the Board of Directors for Operation Hummingbird and served as president of Historic Rock Hill from 1996-1998. He is a member of the Society for the Study of Evolution, the Animal Behavior Society, the American Association for the Advancement of Science, the National Center for Science Education, and several others.

Rogers served as a faculty marshal from 2005-2010 and was named as Winthrop’s Distinguished Professor for 2002.

My students and I study the behavior and vocalizations of Amazon River Dolphins, especially mother-calf pairs, in the Tahuayo River in northeastern Peru. They’re also known as Pink Dolphins because adults, especially males, have pink skin. The adults live in the Amazon and other large, fast-moving, noisy South American rivers that are dangerous for the young, so females go into smaller, quieter streams from March through June to have their calves at the end of the rainy season.

Those annual rains swell the streams which then overflow their channels, flooding the surrounding forest. Mothers use the quieter but complex flooded forest structure to teach their young how to be dolphins, including helping them learn to use sonar to find prey and to avoid objects while they navigate the muddy, murky water. The slowly flowing water also means the babies don’t have to expend as much energy fighting currents; so they can grow faster, first on their mother’s rich milk and later on fish.

This past summer, my graduate student, Grace Olson, and I returned to Peru to record low frequency sounds, tones in the normal human hearing range, from mothers and calves. They are the sorts of vocalizations some other dolphin species use to communicate between individuals. We want to determine whether Amazon dolphins have vocal dialects across their large range and so we are comparing our Peruvian population’s sounds with some that Grace recorded 1000 kilometers away in Brazil. Many bird species have distinctive regional dialects in their calls and we know that human languages change with geography, as between American and British English. In fact, it would be remarkable not to find geographically-based differences in an animal as dependent on sound to negotiate all aspects of its environment.

If the dolphins have distinct dialects it tells us there likely is little or no genetic exchange between the populations. That could eventually result in the formation of new species – so we could be listening to speciation in progress.