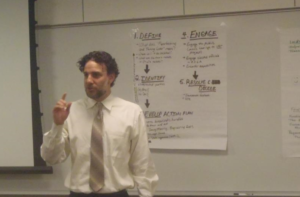 Political narratives are an important part of an election cycle.

Rich Holtzman is an Associate Professor of Political Science and the Coordinator of the Political Science Program at Bryant University in Smithfield, RI. He received his Ph.D. from the University of Texas at Austin and his B.A. from the University of California, San Diego. He is an award-winning teacher of American Politics and has published research on Presidential Rhetoric, Narratives and Discourses in American Politics, Teaching Interpretively, and the Scholarship of Teaching and Learning.

When it comes to politics, narratives matter.

Narratives are the building blocks with which we construct our political reality. To give something meaning—say, a policy, an event, or an individual—we place it within the context of a broader story. The narrative helps us make sense of this new information.

For example, as my past research has argued, a concept such as “Obamacare” has no essential or inherent fixed meaning; instead, it is defined within particular contexts from particular points of view. “Obamacare” means a push for equality to some, an attack on personal freedoms to others, a presidential power grab to a third group, and so on. Some narratives come to shape our understandings of the world, others fail to gain traction; but it is the competition among them that is the stuff of politics.

In the current political climate, it is especially important to recognize the presence and influence of narratives. Examined through the lens of narrative analysis, the presidential campaign between Hillary Clinton and Donald Trump appears in a different light.

Political scientists have argued that recent decades have seen a shift from issue-driven to personality-driven campaigns. The predominance of personal attacks in this campaign leave no doubt that this election is not a competition between ideas. But the conventional portrayal of it as a competition between personalities is not the only other interpretation. A narrative-focused perspective reminds us that whatever comes to mind when we hear the words “Clinton” or “Trump” are narratives themselves—their personalities are stories.

2016 may be unique in many ways, but like all elections, it is a competition to tell the most compelling story. As Mark McKinnon, chief campaign media advisor for George W. Bush, put it: “Good stories win.”

It’s just a lot harder to tell one these days.

The Enduring Narrative of Socialized Medicine