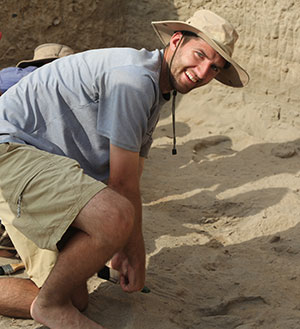 Did Homo Erectus walk as we do today?

Kevin Hatala, post-doctoral researcher at the Max Planck Institute for Evolutionary Anthropology and now at Chatham University, determines whether the feet of our ancestors resemble our own.

Kevin Hatala is a paleoanthropologist whose research interests are centered on the evolution of hominin anatomy and locomotion, including how they were influenced by changes in ecology and behavior throughout human evolutionary history. Much of his research to date has focused on fossil hominin footprints, and the unique information that they can tell us about human evolution.

Kevin is a National Science Foundation (USA) Social, Behavioral, and Economic Sciences Interdisciplinary Postdoctoral Fellow. He is carrying out his postdoctoral research at the MPI-EVA but also through The George Washington University. His postdoctoral research is aimed at developing new methods that can be used to extract anatomical and functional data from footprints in the human fossil record. His approach combines ongoing paleontological excavations of fossil hominin footprint sites in Kenya with laboratory experimental projects aimed at modeling the ways in which locomotion is recorded in footprints. His work also includes developing quantitative methods for analyzing and interpreting the data preserved at these fossil hominin footprint sites. For this research, Kevin collaborates with colleagues from the American Museum of Natural History, The George Washington University, Brown University, and the MPI-EVA.

For most people, the phrase ‘human fossil record’ brings to mind the iconic skulls, bones, and stone tools we’ve all seen in National Geographic. These finds can be fascinating but over time we’ve realized that even thorough analyses of bones and artifacts can’t answer all of the important questions about our evolution. Especially questions concerning dynamic behaviors – things like how certain fossil species walked, or how they interacted with other individuals.

Recently, my colleagues and I have turned to a different type of data to try to fill in some of the gaps in our understanding of fossil human behaviors. Our international research team has discovered, excavated, and analyzed multiple assemblages of 1.5-million-year-old footprints near the town of Ileret, Kenya that we believe were made by our extinct relative Homo erectus.

Through a series of experiments, we have shown that these footprints are essentially indistinguishable from footprints made by modern people. We have found strong evidence that Homo erectus had a very human-like foot anatomy, and that their feet functioned in much the same way as our own. These adaptations could have allowed Homo erectus, 1.5 million years ago, to walk efficiently on two legs in a manner very similar to how we walk today.

Also, based on the sizes of these footprints, it appears that several adult males were traveling over the same muddy surfaces at about the same time, potentially as a group. This suggests mutual tolerance or perhaps even cooperation between male Homo erectus individuals. Male-male cooperation underlies many social behaviors that are characteristic of modern humans, and this dynamic may have supported the emergence of human-like social behaviors in Homo erectus. These hypotheses will require further testing but these fossil human footprints are already providing an exciting window from which we can better understand some of the formerly ‘hidden’ aspects of our evolutionary past.