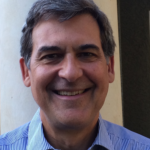 How does the brain recognize the words you read?

John Henderson, professor in the department of psychology at the University of California Davis, explains how finding out the answer could help people who have difficulty reading.

Dr. John M. Henderson is a professor of psychology and core research member of the Center for Mind and Brain at the University of California, Davis. He studies visual cognition, with a focus on reading and real world scene understanding. He uses eyetracking, computational modeling, and neuroimaging methods from cognitive psychology, cognitive science, and cognitive neuroscience. In addition to his scientific papers, he has also written for the public in outlets like The Conversation, Scientific American, and Slate Magazine. His research is funded by grants from the National Science Foundation and the National Institutes of Health.

Your Brain on Reading

Skilled reading involves a complex interplay of underlying processes. Readers quickly recognize individual words, retrieve their meanings, establish grammatical relationships, and ultimately combine all of this information in order to understand the text. How does the brain do this? My colleagues and I have recently developed a new method to address this question. By combining eyetracking with neuroimaging, we’re able to establish which word a reader is attending to at each moment in time, and then tie neural activation to each attended word.

This gives us a window into brain activity as it unfolds across the text. We’ve demonstrated the usefulness of this new technique in two recent studies directed at answering a fundamental question about reading, and indeed, bearing on a deep question about the nature of language itself. In this study, we asked where the meanings of words come from. One view proposes that word meanings are based on a complex web of relationships among concepts. Another view proposes that words are ultimately grounded in how we perceive and interact with the things they stand for.

We found that areas of the brain related to perception and movement were more engaged when readers were attending to words that refer to concrete real-world objects that can be manipulated. This result supports the view that meaning is ultimately grounded in perception and interaction with the world. More generally, our method gives us a way to ask fundamental questions about reading, and also holds promise for honing in on differences in the brains of those who read skillfully and those who have reading difficulty.