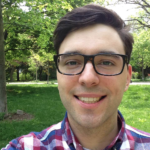 Selective attention is a key practice to help us process our busy world.

Today on The Academic Minute: Eric Taylor, post-doctoral research fellow in the department of psychology at the University of Toronto, discusses the two modes of information selecting we use and whether they’re automatic.

The visual world contains too much information for the human mind to process. We get around this limitation using selective attention – to pick out the information that matters. For example, if you were driving on the highway, you would attend to other cars and road signs while ignoring the bobblehead on your dashboard. Our actions and behaviours depend on what information is selected and what information is ignored.

Broadly speaking, attention selects information in two modes: Spatially, like a spotlight illuminating all stimuli in one region, or by selecting objects as discrete units. Scientists in our field agree that attention uses both space-based and object-based modes of selection under different circumstances, but they disagree on when we use the object-based mode. Some scientists think it is a default, automatic mode, whereas others argue for the strategic deployment of object-based selection. In our study, we directly tested the automaticity of the object-based mode.

Object-based selection is demonstrated in the lab by showing that attending to part of an object speeds perception of the entire object. In our study, participants searched for red or green targets, which were superimposed on parallel rectangles, which were also presented in red or green. Participants were faster to perceive the target when they attended to any region of the same rectangle – evidence for object-based selection. But this advantage only emerged when the object colour matched the target colour. When participants guided attention toward the target colour – say, red – red rectangles were used for attentional selection. When they guided attention toward the non-target colour – say, green – we observed only location-specific advantages; no evidence for object-based selection.

In other words, we found that one of attention’s two main modes of selection can be turned off, as it were, through internal guidance. If object-based selection were truly automatic, it would occur regardless of how we focus attention.