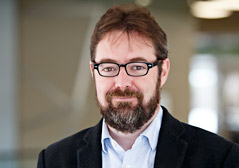 Have we found the fingerprints of the first group of stars in our universe?

John O’Meara, associate professor of physics at St. Michael’s College, explores how looking 12 billion years in the past can lead to a better understanding of the full story of the cosmos.

My primary research focus is to attempt to better understand the universe through the study of absorption lines seen in the spectra of high redshift quasars (or QSOs).  When we pass the light from any astronomical object through a spectrograph, it is broken into its constituent colors, producing a value for the intensity of the light as a function of the wavelength of the light.  Spectroscopy is a powerful tool with which we can learn what types of atoms astronomical objects are made of, what their energies are, and how they are moving relative to us on Earth.  In the case of QSO spectroscopy, the spectrum we see contains information about both the QSO and any material which happens to also lie along the line of site.  In my research, it is the intervening material which interests me.

Traces of the First Stars

The air we’re all breathing right now is the result of a recycling program on the grandest of scales.  Stars form by the collapse of giant gas clouds: mixtures of hydrogen, helium, and heavier elements like carbon, oxygen nitrogen, etc.  The stars go through their lifecycle, burning hydrogen into helium via fusion in their cores, exhausting their fuel, and moving up the nucleosynthetic chain, building up the pieces of the periodic table as they die.

At the end of their lives, depending on their mass stars either expand away, or explode.  The end result is the same:  the heavy elements are spread throughout interstellar space to be incorporated in the next generation of stars and planets which orbit them.  When we run the clock backwards in time, we expect to see generations of stars with fewer and fewer heavy elements, until a critical time in the history of the cosmos:  that time when the first stars formed from the elements produced in the big bang. These stars, known as ‘Population III’, have eluded direct observation, as they formed at a time nearly inaccessible to the current generation of telescopes.  Nevertheless, the fingerprints of these stars may have been found.

In research conducted with Dr. Neil Crighton and Michael Murphy of Swinburne University, using some of the largest telescopes on Earth, we looked towards gas clouds over 12 billion years in the past. One cloud in particular piqued our interest:  it had less than one 2500th the heavy element content of the sun, and the trifling amount of Carbon and Silicon it did have matched model predictions for the amounts made by Population three stars.  We had potentially found the fingerprints of the first stars, the beginnings of the recycling program.

This will begin to tell the full story of the heavy elements in the universe, including those in us and the world we inhabit.