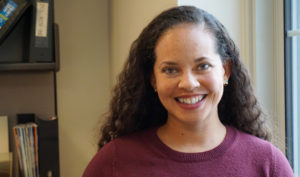 Not getting enough sleep carries an increased risk of obesity.

Erin Hanlon, Research Associate (in rank of Assistant Professor) at the University of Chicago, explains that lack of sleep can make your body go haywire, causing you to want to overeat.

Erin C. Hanlon, Ph.D. is a Research Associate in the Sleep, Metabolism, and Health Center and the Department of Medicine at the University of Chicago. As a behavioral neuroscientist, she is interested in the relationship between behavior, brain mechanisms, and physiology that may impact human health. Primary research interests have included the detrimental effects of sleep loss and how sleep benefits health. In particular, she has focused on the effect of sleep restriction on brain reward and feeding systems as well as peripheral metabolic systems in both rodent and human models.

In 14 individuals, we examined serum endocannbinoid levels over a 24hr period, which included either 8.5hrs or 4.5hrs of sleep. We found following normal sleep there was a clear circadian rhythm with a nadir around mid-sleep and a peak in the early afternoon.  Sleep restriction significantly increased the amplitude of the rhythm due to an increase in the peak levels.  The increase was delayed and remained elevated until the evening.  Following sleep restriction, these individuals report increases in hunger and a stronger desire to eat, along with an inability to inhibit snack consumption, corresponding to the same time as elevated endocannabinoid levels.