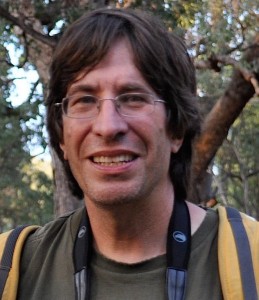 How do you show off your colors in a dark environment?

Leo Fleishman, professor in biology at Union College, discusses how one animal has found a way to let its colors shine in the shade of the forest.

Leo Fleishman is a professor in the Biology Department at Union College, where he teaches courses in Introductory Biology, Animal Behavior and Animal Physiology.  His research explores how animals perceive the world, and how their sensory perception  influences  the evolution of their communication signals.   He is currently studying how color- and motion-vision influence the evolution of visual signals used by lizards native to Jamaica, Puerto Rico, Cuba and the Dominican Republic.  He has authored over 30 peer-reviewed publications and has been awarded grants from the National Science Foundation.  Prof. Fleishman has a Ph.D. in Neurobiology and Behavior from Cornell University and a BA in Biology from Tufts University.

Many animals use impressive colors to communicate with other members of their species. Animal colors are normally made visible because the surface of the body reflects natural sunlight. In brightly lit habitats reflected colors often appear intense and brilliant.  In shaded habitats, like forests, much less light is available and the same colors can appear rather dull and difficult to see.

We study communication in a group of small lizards known as anoles.  Hundreds of species inhabit the islands of the Caribbean. Males possess a thin colorful, expandable throat fan, called the dewlap, which they open and close to produce a conspicuous flash of color that attracts females and repels other males.

Anoles are only active during the daytime.  For species that live in un-shaded areas, reflected sunlight makes the dewlap colors vivid.   However, many species live in shaded forest habitats, where the dim light can make the dewlap colors hard to see. 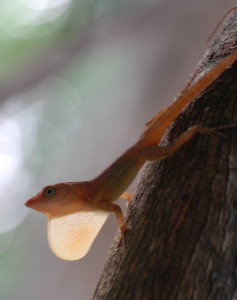 To solve this problem many of these forest-dwelling species have evolved an especially thin, light-colored dewlap.  Light striking the back of the dewlap transmits through it, and becomes colored and diffuse as it does so.  This pattern of illumination is known as translucence.  To a viewer the color is determine by reflected light bouncing off the front of the dewlap added to the light striking the back of the dewlap and passing through it. This backlighting makes the translucent dewlap look brighter than other objects in the forest, and it actually appears to glow. This makes the dewlap color very easy for other lizards to detect and recognize.

This is the first case that has ever been described of an animal relying on a translucent visual signal to make itself highly visible when light from the sun is reduced by forest shade.