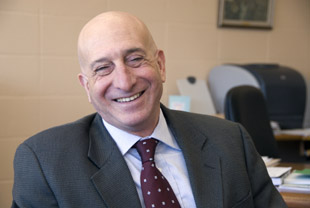 Dr. Alvin Shrier, professor and Hosmer Chair of physiology at McGill University, explains his research into cardiac arrhythmia and a new method to treat it.

Dr. Shrier lab is interested in ion channel function and cardiac dynamics. We study the molecular mechanisms that underlie the quality control and regulation of hERG and TRPM7 channels, respectively. We also use optical dyes to image the conduction of the cardiac impulse in patterned cultured cardiac myocytes that we analyze and model using nonlinear mathematical techniques. The aim is to understand the origin and termination of abnormal rhythms that occur in the heart and other excitable systems.

The human heart has a complicated three-dimensional structure and therefore is difficult to analyze. To tackle this problem, we use a reduced model of the heart: tightly-coupled balls of embryonic chick cardiac cells that beat spontaneously, which are treated with a drug that induces alternating rhythms. Roughly 15 minutes after initial drug treatment, an erratic pattern emerges, with increased fluctuations in the response of the balls of cardiac cells. And then, about 20 minutes later, an alternating rhythm is established.

We thought that the erratic pattern before the transition held the key to the problem, and indeed it did. Working in our lab and using tools from mathematics, we developed a method — using simply the time between consecutive beats — that detected exactly how close the ball of cells was to the transition from normal to alternating. What is remarkable about this method is that it is general — that, in fact, it may be possible to use this method, as a way of predicting alternating cardiac arrhythmias in people.