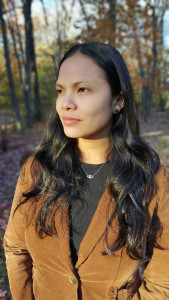 Is there a link between historical medical texts and fictional texts?

Kathleen Tamayo Alves is an Assistant Professor at Queensborough Community College of The City University of New York, where she teaches literature and composition. She holds an M.A. and a D.A. in English from St. John’s University. Her research centers on eighteenth-century literature and culture, biopolitics, and literary history. She has published and presented portions of her book-length project, Body Language: Medicine and the Eighteenth-Century Comic Novel.

Feminists have rejected biologically determinist arguments fully realized in the great clinical revolution of the nineteenth century. Medical and scientific claims of the fixity of gender and the inherent weakness of women saturated the cultural imagination of the time, including literary representations of women. Does imaginative works of fiction reinforce this patriarchal project? Would we see the germs of such thinking in the eighteenth century? My work seeks to answer this question, exploring how the female body in comic works is expressed through the discursive constructs of Enlightenment medicine.

But what links works of fiction and medical texts? First, both draw from previous traditional modes. The novel can be traced to medieval romances and Enlightenment medicine continued to apply Galenic and Hippocratic principles in diagnosis and treatment. Second, both forms presuppose a dialogic relationship with their audience who seek a somatic response: Readers laugh at the humor inherent in comic fiction and patients solicit medical practitioners’ opinions for the proper course of treatment. Third, both seek to shape the structural discourse in which they occupy to better define its limitations and virtues. In the early novel, authors worked towards a narrative process to contain generic elements for coherence and credibility. The difference of ethos and style is evident, for example, between the coarse underworld of crime narrated in the episodes of Daniel Defoe’s Moll Flanders, and the domestic drama told through sustained epistolary narrative in Samuel Richardson’s Pamela. Likewise, the physical sciences continued to develop a specialized language to systematize and to classify the human body to render its mechanisms intelligible. For instance, iatromechanists and iatrochemists depended on completely different systems to explain the body’s operations. The loci of these intersections of the literary and the medical, I believe, bring different methodological approaches into confrontation with one another. Scientific discourse has centrally contributed to the construction and representations of the female body, especially in an age when scientific practice was almost exclusively male. The interface between the history of medicine and the history of women can be seen in these intersections.