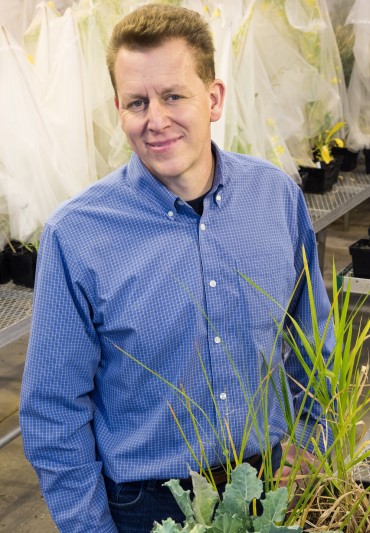 Sometimes the evolution of two organisms occurs in tandem.

Chris Pires, associate professor in the division of biological sciences at the University of Missouri, is studying this type of evolution – commonly called co-evolution.

Dr. Chris Pires studies the evolution of plants. He does this by comparing the genetic material of plants that are known to regularly duplicate their chromosomes. This process, known as whole genome duplication, can give rise to new plant types and traits. He creates the equivalent of a “family tree” for these plant species, which he then uses to discover how this duplication influenced their evolutions. Pires works with plants in the genus Brassica, which includes cabbage, broccoli, cauliflower, and canola, and Asparagales, which includes onions, asparagus, irises and orchids. He recently discovered that chromosomes within canola can rearrange themselves in unexpected ways during meiosis, a stage during which cells divide to form pollen or eggs. In addition to shedding light on plant evolution, his research may be used to develop new or more valuable crops.

For millions of years, plants and their predators have been escalating an evolutionary arms race with each other – and In the case of cabbages and their butterflies, that race seems to have started roughly 90 million years ago. Ancestors of the Brassicale order – which includes horseradish, wasabi and mustard as well as kale and cabbage found a way to fight off cabbage butterflies by creating glucosinolates, the sharp-tasting chemicals that might be tasty to you and me.

Throughout the course of the arms race, this evolutionary give and take helped create sharper tastes and helped plants ward off even more predators – essentially, the glucosinolates they were creating turned the predators’ guts inside out!

The co-evolution study we conducted, recently published in the Proceedings of the National Academy of Sciences, helped solidify the co-evolution theories established by pioneering biologists Peter Raven and Paul Erhlich more than 50 years ago.

Led by our research teams at the University of Missouri and Stockholm University, we essentially lined up the evolutionary family trees of Brassicales and ancestors of the cabbage butterfly. We found that for each evolutionary event, plants duplicated their genome and those multiple copies of genes evolved new traits like chemical defenses. Then cabbage butterflies responded by evolving new ways to fight against them. And so on and so on.

Understanding how co-evolution works could help provide genetic clues for producing heartier plants and food for a growing global population.