Curing diseases is a lot like solving a puzzle. 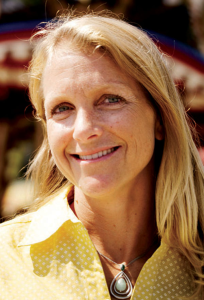 Elizabeth Thomas, a molecular and cellular neuroscientist at The Scripps Research Institute, is working to cure Huntington’s Disease on a genetic level.

Dr. Elizabeth Thomas is an associate professor in the department of molecular and cellular neuroscience at The Scripps Research Institute in La Jolla, CA. Dr. Thomas received a Bachelor’s degree in Biochemistry from the University of California, Berkeley, and a Ph.D. from the Department of Pharmacology at the University of California, Irvine. Current research in her lab relates to the molecular and epigenetic mechanisms of neurodegenerative and psychiatric disorders and therapeutics used to treat these disorders.

In my lab, we are exploring new ways to treat neurological disorders, such as Huntington’s disease, a devastating, neurodegenerative disease. Huntington’s disease is an inherited illness, which leads to a loss of motor skills, cognitive impairment, and, ultimately, death.

Increasing evidence suggests that changes in epigenetic gene regulation are a key feature of this disorder. “Epigenetics” refers to changes in gene expression that are not caused by changes to the actual genetic code. For example, some epigenetic changes are triggered by diet or toxins in the environment. Epigenetic changes can be passed to the next generation and have been linked to conditions such as obesity and psychiatric disorders.

We are studying a family of compounds called histone deacetylase inhibitors. Previous studies in our lab have shown that these inhibitors can improve motor skills and cognition in different mouse models of Huntington’s disease.

We found that these compounds caused changes in DNA methylation, an epigenetic modification that can be inherited in the germ line—for example, through epigenetic changes to the DNA of sperm cells.

Further, the offspring of the drug-treated mice showed a later onset of Huntington’s disease symptoms and their behavioral effects were less severe.

These findings are exciting because they are the first to show that a drug therapy given to parents can benefit their children too. Could these beneficial effects persist in generations of grandchildren or great-grandchildren? We’re looking into it.