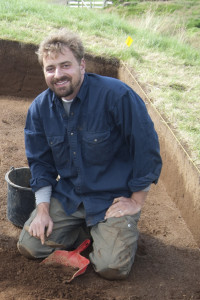 nks of Vikings, lavish dinner parties are probably not the first thing that come to mind.

But, Davide Zori, a professor at Baylor University, will tell us: vikings were really into parties.

Davide Zori is assistant professor in the Baylor Interdisciplinary Core at Baylor University. His research concentrates on the Viking expansion into the North Atlantic. He conducts fieldwork in Iceland addressing the interaction of the Norse settlers with new environments, the construction of a migrant society, and the subsequent evolution of endemic political systems. He employs a multidisciplinary approach combining material culture and written evidence and is the author of Viking Archeology in Iceland: Mosfell Archaeological Project.

Vikings are stereotyped as marauders and traders. But most Viking Age Scandinavians spent the majority of their time farming, herding livestock and strengthening social relationships.  Our archeological work in Iceland indicates Viking immigrants made great effort to produce beef and beer in order to maintain the “big man” society of mainland Scandinavia—a political economy in which chieftains hosted feasts in great halls. They used wealth and status displays to flex political muscle with rivals and to enlist supporters. 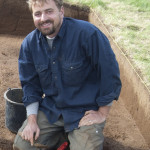 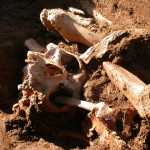 These human bones, buried in a pagan grave, later were unearthed and reinterred near a church at an ancient Viking farmstead in Iceland, researchers say.” (Photo courtesy of Mosfell Archaeological Project) 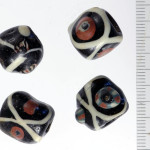 Imported glass beads discovered by archeologists at the Viking farmstead were a sign of wealth.” (Photo courtesy of Mosfell Archaeological Project) 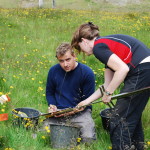 The problem was that sub-arctic Iceland presented significant environmental constraints for producing beef and beer. Sheep could graze free range in the winter, but cattle had to be kept in barns.  A shorter growing season and colder climate hampered barley cultivation for beer. Our excavations in Iceland’s Mosfell Valley explore how early Icelanders responded to these challenges.

The chieftain’s farmstead of Hrísbrú, which was inhabited by some of the Icelandic sagas’ most famous Vikings, included a feasting hall nearly 100 feet long dating from the tenth to eleventh centuries. Here we uncovered a high ratio of cattle to sheep bones, consistent with preference for beef. Barley seeds unearthed from floors indicate barley consumption, while pollen studies demonstrate barley cultivation. Beer’s social value makes it likely barley was used mainly for alcohol.

As clear-cutting, erosion, and a cooling climate changed the landscape, being a lavish host got tougher. Archeological findings show the proportion of cattle to sheep bones declined, and Hrísbrú residents shifted to less laborious sheep-herding. As the chieftains’ power waned, they struggled to attract workers to maintain grain fields. At the same time barley cultivation stopped, the chieftains cease to be mentioned in sagas.

What came first? Were the chieftains no longer powerful and so did not need to host extravagant feasts? Or could they not keep up the show and so lost power? I favor the second explanation. It seems to me that the drive for costly beef and beer caused them to prioritize political aims above community well-being. This shows me the risk when politics becomes more important than creating a sustainable and productive society.