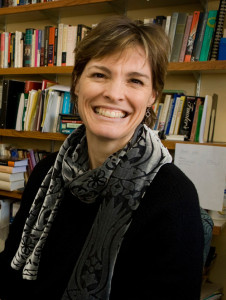 You’ll be amazed at what you hear when you listen closely.

Kim Haines-Eitzen (Ph.D., University of North Carolina, Chapel Hill, 1997) is a Professor of Ancient Mediterranean Religions with a specialty in Early Christianity and Early Judaism in the Department of Near Eastern Studies. Her first book Guardians of Letters: Literacy, Power and the Transmitters of Early Christian Literature (Oxford University Press, 2000) is a social history of the scribes who copied Christian texts during the second and third centuries. She holds joint appointments in the Religious Studies Program and the Department of Classics. Her most recent book, The Gendered Palimpsest: Women, Writing, and Representation in Early Christianity, deals with the intersection of gender and text transmission (Oxford University Press, 2012). Currently, she is working on a new project, entitled Acoustic Encounters in the Late Ancient Desert, which focuses on the desert monastic literature of late antiquity and its attention to sensory landscapes, especially the acoustic dimensions of the desert environment. To learn more, visit her website.

As we celebrate the 50th anniversary of The Wilderness Act, and as our pristine acoustic landscapes vanish at an increasingly rapid pace, it seems only appropriate to consider the rich and reciprocal relationship humans share with the landscapes they inhabit.

New advances in the humanistic fields of sounds studies, environmental history, and the philosophy of emotion along with the interdisciplinary techniques and methods of bioacoustics provide insights into ancient religious texts, ideology, and practice.

My work focuses on desert monasticism in late ancient Egypt and Palestine.

Take, for example, the Life of Anthony, written in the fourth century by Athanasius, the bishop of Alexandria.   The story presents Anthony as a hermit leaving the city to find quiet solitude in the Egyptian desert, but tensions mount as he encounters a cacophonous landscape: demons hiss at him like snakes, they roar like lions, crash like thunder, and they even sing hymns like monks in an attempt to seduce him.

Such acoustic encounters betray the fraught landscape of the desert itself as a terrifying place of danger and also a landscape fit for spiritual revelation and purification.   This story, and the sayings and lives of other desert monks, have much to tell us about the sonic environment, if we listen carefully.

In the darkness of the desert, sounds can be as familiar as a gentle wind or as strange as howling sands and crashing rocks. Modern ambient recordings of desert landscapes evoke the acoustic worlds of these texts, and they suggest that the lives of monks in late antiquity were intimately shaped by an experience of dynamic soundscapes.

Thus research into acoustic landscapes gives us an entirely new way of understanding ancient texts and the imaginations that inspired them – and give us yet another reason to preserve and care for wilderness soundscapes.