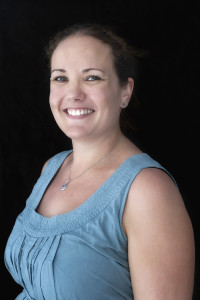 Can your past sexual partners influence the genetics of your children?

Dr Angela Crean is an evolutionary ecologist who is interested in phenotypic links between the parental environment, gamete quality, and offspring traits. She is currently an Australian Research Council Discovery Early Career Research Fellow, based in the Ecology and Evolution Research Centre within the School of Biological, Earth and Environmental Sciences at UNSW Australia. Angela received her B.Sc (Hons) in Marine Zoology and Environmental Science from The University of Melbourne (2004) and PhD in Evolutionary Ecology from The University of Queensland (2011). She has been working with A/Prof Russell Bonduriansky at UNSW Australia since 2010, investigating mechanisms of non-genetic inheritance using neriid flies as a model study system.

But, nature rarely turns out to be that simple, and we now know that there are several non-genetic mechanisms of inheritance operating in parallel to genetic inheritance we’re so accustomed to thinking of. 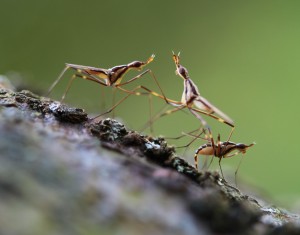 A female neriid fly (Telostylinus angusticollis), at bottom right, lays eggs on rotten tree bark, while her mate fights off an interloper.

This means we need to re-examine many ideas that were dismissed by classical genetics. One such idea is telegony – the belief that offspring can inherit characteristics of a previous mate of their mother.

To test this idea we studied neriid flies. Previous research has shown that male neriids pass their acquired condition on to their offspring. Flies fed a larval diet high in nutrients are large, and produce larger offspring, than flies fed a diet low in nutrients. To test for telegony, we mated immature females to either a small or large male, so that their eggs developed after being exposed to the semen of this first mate. Two weeks later, we re-mated each female to a second small or large male to fertilize her mature eggs, and measured the size of these offspring.

Genetic tests confirmed that the second male sired the offspring. However, offspring size was determined by the diet of the first male that the females mated with. So, if a female was initially mated to a small fly, her offspring were small, even when their father was large (and vice-versa).

We don’t yet know if similar effects are found in other species, but this research suggests that we need to re-examine some previously accepted beliefs about genetics and heredity.

Read more: The Guardian: Your baby looks like your ex? This research is scarier than Alien | The Telegraph: Could previous lovers influence appearance of future children?