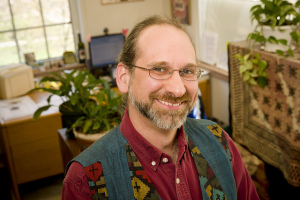 Have you ever been offended by a joke?

Dr. Steve Gimbel, a professor of philosophy at Gettysburg College, discusses the nature of offensive jokes and why we seem to have an type of ethical understanding embedded in humor.

Dr. Steve Gimbel‘s research focuses on the connection between scientific evidence and explanation, interpretations of the geometrical aspects of gravitation theories, and the development of 20th century analytic philosophy. He has also been interested in questions of sportsmanship arising from the Kasparov/Deep Blue chess match, the geometry of M.C. Escher’s art, the environmental ethic of the American Nazi Party, and Dr. Seuss’ non-trivial use of tautologies. Most recently, he has been working in the philosophy of humor.

An Ethics of Joking

We will often try to excuse ourselves from implications of things we have said by protesting “I was only joking.”  When we make a joke, we are being playful with words – their sounds, meanings, and cultural connotations.  Jokes are meant to display our cleverness or our appreciation for some joke writer’s cleverness, most of all they are meant to amuse our audience.  But we also take jokes seriously.  Gilbert Gottfried lost his job as a voice-over actor because of jokes he made.  Politicians are regularly apologizing for jokes they forwarded through their e-mail accounts.  Jokes can hurt, demean, or silence others.  Clearly, there is an ethics of joking defining what is and isn’t socially acceptable.

Joking is a complicated matter.

There are different kinds of jokes, different kinds of audiences, and different kinds of situations.  What is a fine joke for one person to tellcan be morally problematic for another.  We judge the ethical acceptability differently if the joke is an off-the-cuff witticism in the flow of conversation than if it is joke that you heard and choose to repeat.  The difficult project is to enunciate clearly the conditions that make a joke acceptable or problematic to tell in a given context.

Since the political correctness movement of the 1980s and 90s, we have used the notion of offensiveness to do this work, but it is a deeply problematic notion.  Different personalities are offended by different things, sometimes the offense is unwarranted and other times it is good for people to be offended as it is only when we shake people up that we are able to realize our presuppositions that themselves could be harmful.  Comedians, from time to time, have made the world a better place and it was often by making jokes that offended those who were defending an unjust way of being. But, if not offensiveness, then what?

The answer is to look at what a joke does.  Is it a mere display of cleverness or is it a way of saying something we otherwise would have been reluctant of to offer publicly?

Does it silence a voice or does it force us to look at something in a different light?