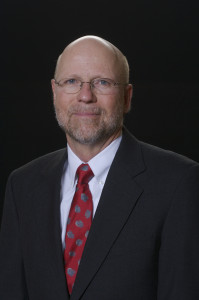 Jazz legend Dave Brubeck is noted for his incredible music skill as a pianist and bandleader. But, his work as a civil rights activist doesn’t get nearly the attention it deserves.

Keith Hatschek, a professor of music at The University of The Pacific, is working to to change that.

Keith Hatschek, director of the Music Management Program at University of the Pacific in Stockton, Calif., has worked in all aspects of the music industry, from performer and songwriter to vice president of sales and marketing for Music Annex Inc. He is also the founder of Bayshore Studios. He headed Keith Hatschek & Associates, a San Francisco Bay Area-based marketing and public relations firm serving the entertainment and media technology industries, from 1995 to 2001 when he joined the faculty of University of the Pacific’s Conservatory of Music. He is the author of “How to Get a Job in the Music and Recording Industry” (Berklee Press, 2007) and “The Golden Moment: Recording Secrets” (Backbeat Books, 2005). He is a recognized scholar of Dave and Iola Brubeck and is writing a biography on their lives. His article, “The Impact of American Jazz Diplomacy in Poland During the Cold War,” was published in a 2010 issue of Jazz Perspectives, an international peer-reviewed journal devoted entirely to jazz scholarship. He writes a monthly column for the music  blog “Echoes: Insight for Independent Artists.” He recently appeared at the 55th annual Monterey Jazz Festival as part of the 50th anniversary celebration of Dave and Iola Brubeck’s jazz musical, “The Real Ambassadors.” About University of the Pacific Established in 1851 as the first chartered university in California, University of the Pacific prepares students for professional and personal success through rigorous academics, small classes, and a supportive and engaging culture. Widely recognized as one of the most beautiful private university campuses in the West, the Stockton campus offers more than 80 undergraduate majors in arts and sciences, music, business, education, engineering and computer science, and pharmacy, and health sciences. The university’s distinctive Northern California footprint also includes a campus in San Francisco, which is home to the Arthur A. Dugoni School of Dentistry, and the McGeorge School of Law in Sacramento.

The Brubeck Institute was established by University of the Pacific in 2000. Its mission is to build on Dave Brubeck’s legacy and his lifelong dedication to music, creativity, education, and the advancement of important social issues including civil rights, environmental concerns, international relations and social justice. The Institute maintains five programs, including the Brubeck Collection, the Brubeck Fellowship, the Brubeck Festival, Summer Jazz Colony, and the Brubeck Outreach Program.

The Holt-Atherton Special Collections is located in the William Knox Holt Library on the campus of the University of the Pacific in Stockton, California. Its main mission is to collect, preserve, and provide access to manuscript collections made up of primary sources that focus primarily on California and American history, as well as a specialized book collection on the American West. 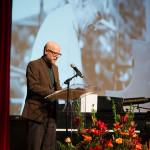 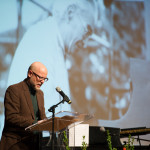 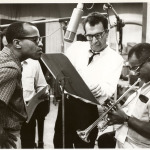 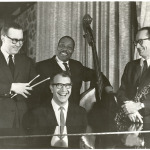 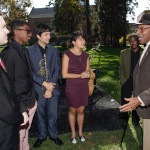 Eugene Wright (right) chats with members of the Brubeck Institute Jazz Quintet at University of the Pacific in October 2013.

All photos of Dave Brubeck are property of The Brubeck Collection, Holt-Atherton Special Collections, University of Pacific Library. ©Dave Brubeck

The crusade against racial inequality in the 1950s and ’60s brings to mind the names of Martin Luther King and Rosa Parks, but musicians of the time waged a lesser-known campaign using music to chip away at racial injustice.

Dave Brubeck, a white pianist and bandleader, helped bring jazz to college campuses around the country and audiences around the world.

While in the Army in Europe during World War II, Brubeck formed and led the Wolf Pack, a racially integrated military band.

In 1960, the Dave Brubeck Quartet was booked on a tour of southern universities but when publicity photos were sent out showing African-American bassist Eugene Wright, 23 of the 25 colleges cancelled due to restrictions on black and white musicians performing together.

Further, Brubeck and his wife, Iola, wrote a musical intended for Broadway called “The Real Ambassadors.” The Brubecks wrote this musical specifically to point out the absurdities of discrimination. Fittingly, it starred Louis Armstrong, another vocal supporter of equal rights.

But Brubeck, the top-selling jazz musician of the day, could find no one to produce it. It was performed just once while both he and Armstrong were alive, at the 1962 Monterey Jazz Festival.

Only recently has it reached a wider audience, as Jazz at Lincoln Center and the Detroit Jazz Festival performed the socially conscious musical.

Today, 50 years after the signing of the Civil Rights Act of 1964, it’s important to honor the giants of the civil rights movement and recall musicians who turned the stage into the soapbox to fight for racial equality.